Water is Life:A Tribute to the Standing Rock Water Protectors

Back in February I rushed to finish the top (post here), then set it aside because there was no rush.  Now rush is approaching as the show set up is May 10.  And it is finished.

Still showing quilts on my sofa until I find a willing quilt holder. Wondered if pillows under the quilt would improve the photo. 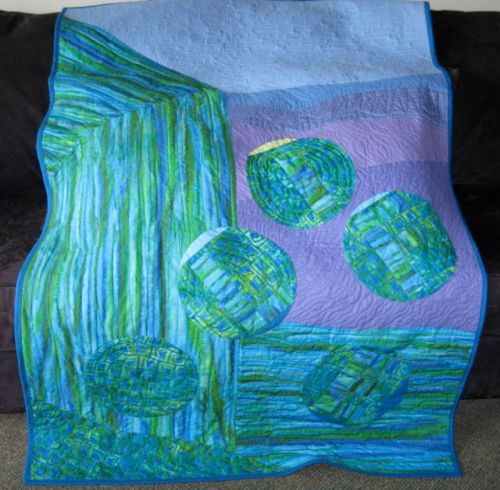 Don’t think it did.  Back to the old way. 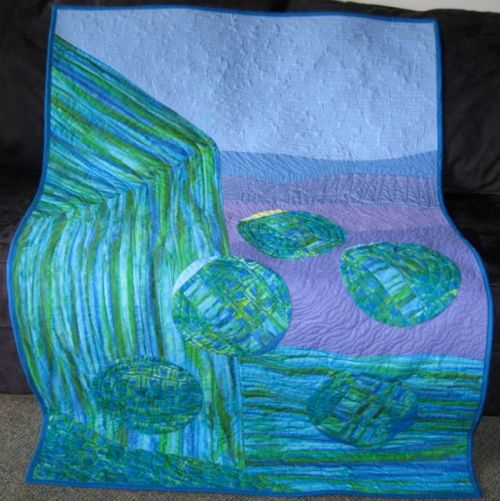 ETA link to the flat view hanging at the show. 5/22/18. And while I’m at it, I’ll link to Clever Chameleon’s Tuesday Colour Linky Party.

For the “sky” I was debating whether to do elongated meander as I ended up doing or some windy, cloudy swirls. I chose the meander because I didn’t want to detract from the bubbles.  I’m not sure it was the best decision. It does look a little better now that the quilt is bound, though.

The other decision was whether to quilt concentric circles as if the letters were not there. I had wanted the letters to be obscure, something to be found on closer inspection. I decided they were hard enough to see, so I quilted around them. The problem with a design detail for closer inspection is that there has to be something to invite that inspection. I’m not sure this quilt has that. I’ll try to watch viewers a bit, if I can be subtle.

Here are some views of the quilting. 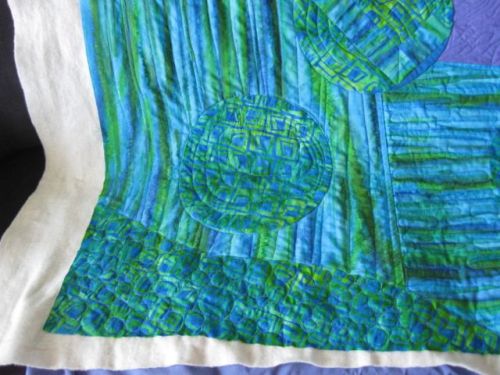 I used “pebbles” to make “bubbles.”  I used concentric circles in the big circle; I’d usually do concentric circles with the walking foot, but the position was such that turning would have been too much wrestling, so I tried free motion.  Maybe I need to learn ruler work. Wonder if there is a ruler foot that fits my Featherweight? (Don’t worry, I won’t mention flaws to people viewing, but my blog is for the good, the bad and the ugly and reflections thereon.) The circles also look smoother from a distance and a washing will do more smoothing yet. 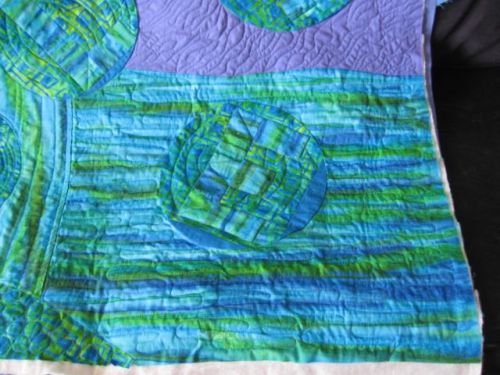 I think the letters are clear, but not too clear.  And the quilted words: 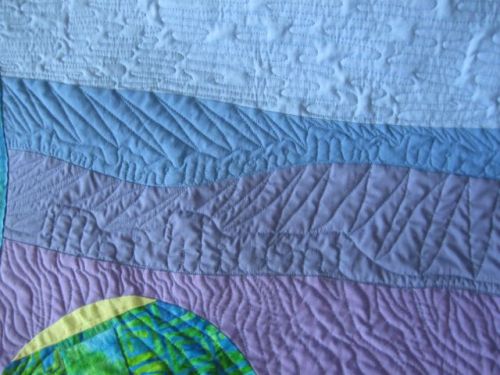 While realism wasn’t part of the plan, I though a nod to perspective was in order, so I used  the differing sizes of the phrase to suggest distance. Maybe it does, maybe it doesn’t.

I’ll like to Connie’s Freemotion by the River and to the Friday finish linkies if I remember (buttons in sidebar).

Longtime readers know of my interest in art as protest; to others, it is new information.

I didn’t make it to Modern Quilt Guild’s QuiltCon this year, nor did I enter any quilts.  I didn’t have any ready that were appropriate to even try. I do have ideas for next year though.

Meanwhile, I really enjoyed this Hyperallergic Article about the quilts with protest statements. ( I don’t know if the article includes photos of all the protest quilts or just a sample. Those who went to the show could comment if there are others that you noticed there.) You will find plenty of photos at the above link to make up for my not having one in this post. I’m wondering how coming upon a protest quilt among others would impact a viewer in contrast to seeing them all together. (If you were there, please comment.)

Click and enjoy. And talk about those that speak to/for you.

I was especially struck by two: “Black, Brown, and White in Orange” is a striking comment about our prison industrial complex.  And the contrast between “Protect and Serve” and the choke hold is stunning.

At long last the second welcome “blanket” is finished. It was so easy to keep putting it off while I did other things, and then the due date appeared. I’ll get it in just under the wire. 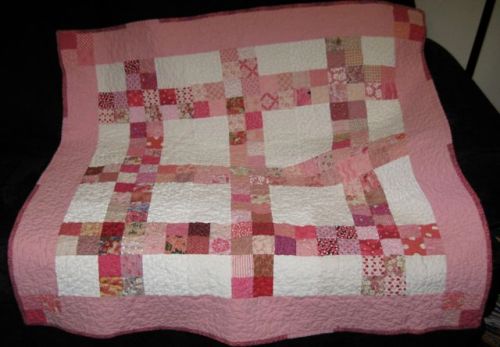 I wrapped the back to the front for binding–since it was a pieced back, there are the pink interruptions in the cranberry print binding. Not as great an effect as a wholly pieced binding, but it will do.

I quilted it with an all-over floral pattern. I’ve used it before, but then it slipped out of favor. A recent blog posting by Angela Walters reminded me of it again, and it seemed just right for all that pink. And it is just as easy as  a simple meander. 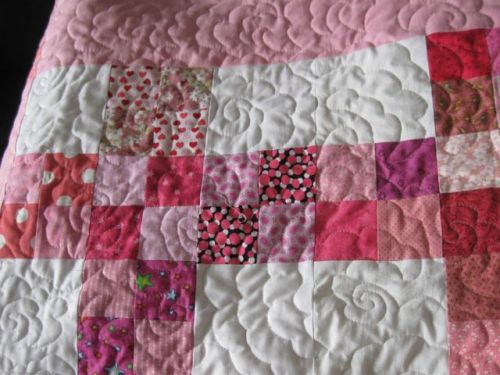 Here is a link to the Welcome Blanket blog–you can browse it and see the exhibit to date. They had received 1500 at the Oct 9 post. Maybe there will be an update soon. The blog mentions mass deep freeze.  An earlier email described the museum process: 72 hours freeze, 24 hours thaw, another 72 hours freeze. Just so no moths, etc. are entered along with the blankets.

The other finish is the top I had started at the retreat. 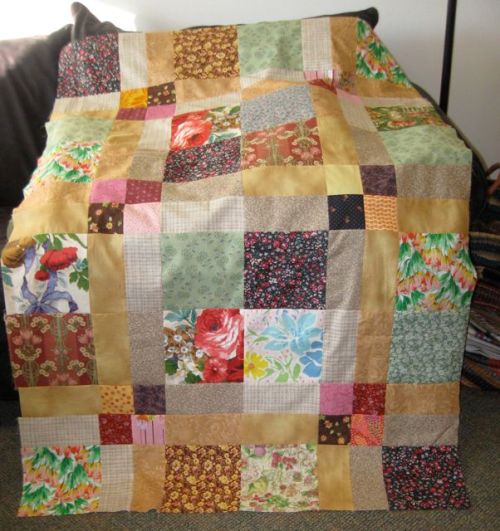 This top is made from the kit I assembled from the parts that people had sent it. Most of us took some extra parts home from what were left at the end of the retreat. I had fun picking up all the big flower pieces, then when they ran out, medium and smaller flowers. I made the rectangle pieces from neutral fabrics that had been donated. We assembled 170 tops while at the retreat, but others have been making tops since as well, so the total is higher now.

This one will go on the pile of quilts that need backs.  A step between top finished and quilting. That plus cutting the batting are the hold ups for me, but eventually they get finished.

Idea Forming for Threads of Resistance

The Threads of Resistance challenge has been in the back of my mind for a while. I’ve been thinking and sketching and thinking and sketching some more. Actually mostly thinking. I probably should sketch sooner as nothing shows an unformed idea so quickly as trying to put it on paper. Until I actually sketch, I can delude myself that an idea is good.

Because of my interest in the Standing Rock Water Protectors, oil accidents contaminating water sources have been my first consideration. 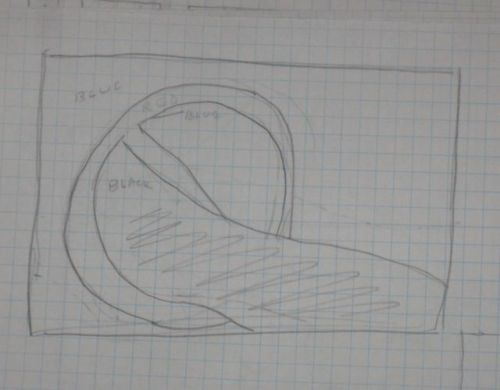 One of the first tries, oil pouring out of the slash-zero ‘Forbidden’ sign. Meh. Too in-your-face. I tried again, making stripes of blue and black for a background an forgetting the oil falls. 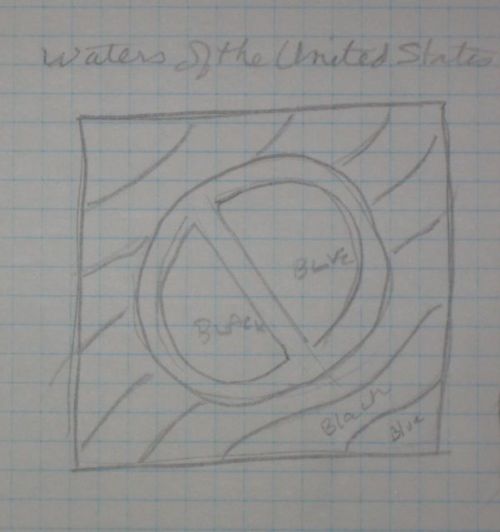 Not much better. Then I got the idea of fragmenting the sign. 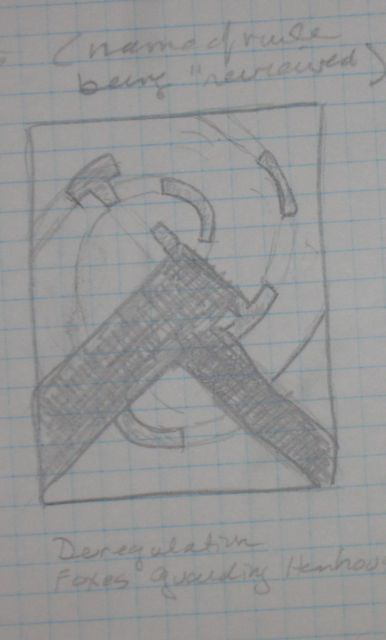 Now I feel like I have something to work with. My next design move is to cut the sign full size, cut it in parts, and then move the parts around on a full sized piece of paper. (Minimum size is 20 x 20–not sure what size I am aiming for yet.)

Penciled in dark = black, medium = red, uncolored =blue. The background will most likely be shades and tints of blue; I’m debating on what shade of red (or varied) for the fragmenting ‘Forbidden’ sign; and the dark will be the black for oil.

Then there is the matter of title and the question of how much to depend on it. Ideas so far include “Waters of the United States,” “Deregulation,” and “Foxes Guarding the Hen Houses.”

Come Friday I’ll link with Nina Marie’s Off the Wall–button in the sidebar.