Oh the Sew-cial Network project with selections from Paintbrush Studio Fabric’s “Picnic” line by Mabel Tan has been finished a while; the writing hand just got lazy. (Thanks to PBS for providing the prints.) After much debate, I ended up using the lighter solid (Paintbrush Solids verbena) for binding instead of teal. 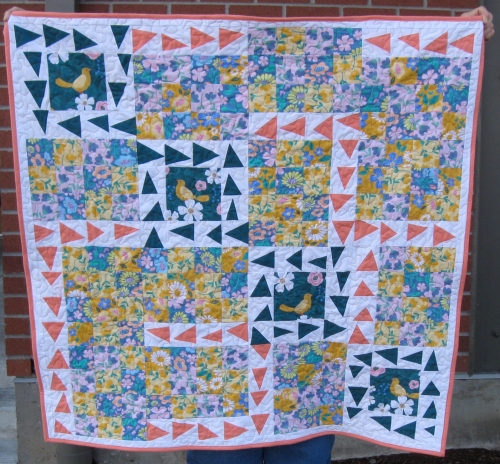 I had debated between the darker teal to frame and the lighter to blend with the four blending flower prints. I’m glad I ended up with the blending effect.  Another thing about the binding (that I didn’t photograph): all four corners mitered just right. That is a first.

The binding also worked adequately on the back. Sometimes it is difficult to get a good color for both. 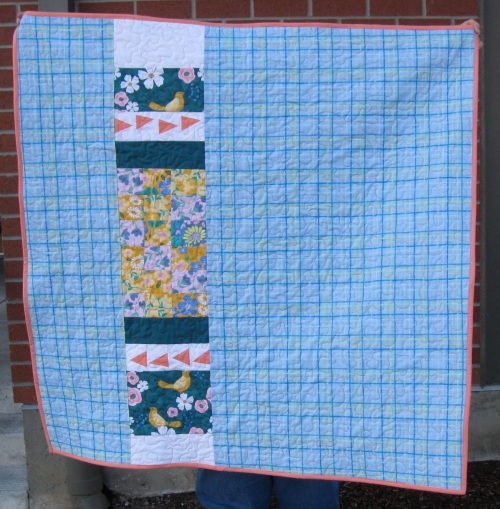 Back when choosing solids, I chose the verbena because it appeared in a couple of the prints in small amounts. You can see that better in the detailed shot. 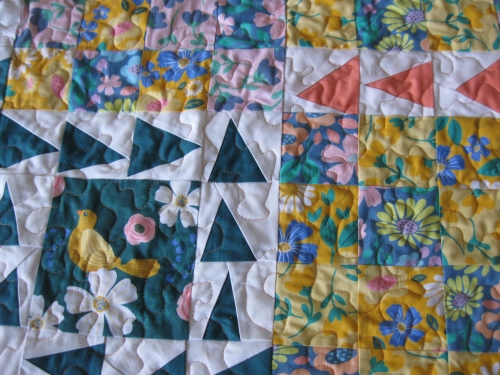 I had debated several quilting possibilities: an overall floral pattern that I have done before (here), something like the first Urban Chicken quilt where I did the white in white thread (here), quilting it down so the triangles would puff up, and an overall meander. I ended up with the latter and think it works fine. It is certainly also the quickest.

And the glam photo 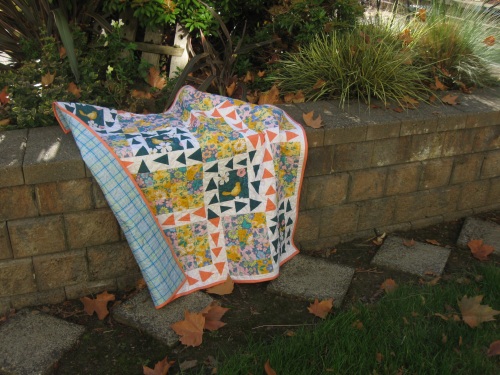 Michele Freedman’s pattern here so you can make one too.

It turns out that I’d not have had enough fabric for the 3 1/2-inch square version I mentioned before (here) either. It was a math error from the beginning of planning. I would have enough with the new solids and using the backing fabric for the front. But I’d lose the blended look that I’d had in mind originally. Not the end of the world, but . . .

I also liked Louise’s suggestion to make bird blocks different from the pattern rather than making all squares larger. However, the repeat was too close for 6 1.2-inch squares. Ah, but 5 1/2 worked fine. And 10-inch finished blocks would also work well. And I could get 42 3-inch squares from each fat quarter instead of 30 1 1/2-inch squares. And that made a big difference.

The big ah-ha came when I realized I could make all the “chickens” the same color instead of following the pattern’s color plan. (Michele Freedman’s instructions are here, in case making the block interests you.)

So I made 3 x 4 piece blocks and a bunch of “chickens” to test layouts.

I didn’t make the total number, just enough to test, so use your imagination to fill in the upper left. I was a little afraid that Plan A would be too dark, so also tried another layout. 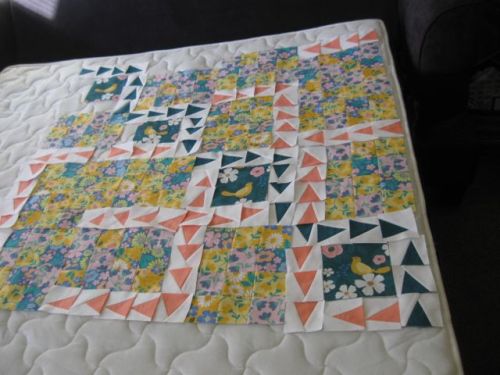 It didn’t take me long to decide I liked Plan A; Plan B was just too pink.

So I made 20 more teal “chickens” and started assembling. 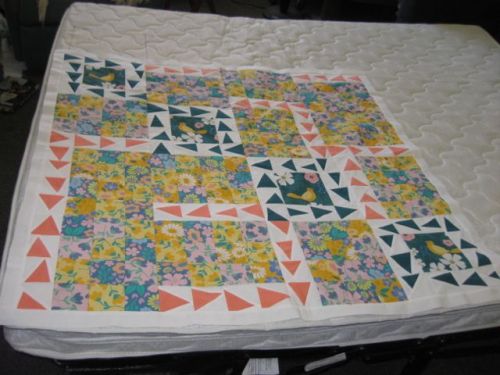 It amazes me how regular the triangle blocks tended to be even though I  was going for “wonky.”  I had to consciously think “left,” “right,” “skinny,” “tall,” “squat,” as I made the blocks. I found it easier to cut white rectangles instead of working from a strip as in the directions. Some were 2 inches wide, some 3. Some 4 inches long, some 4 1/2, some 5, the latter for the sharply angled “chickens.” (I will get quite a few 1 1/2-inch squares from the trimmings.) 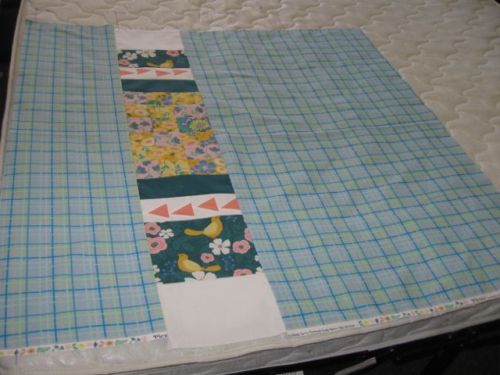 I’d asked for only a yard of backing fabric because I  wanted to use as much of the left over fabric as possible in piecing the back. And I did well. This is all that was left of the Marble Tan “Picnic” prints. 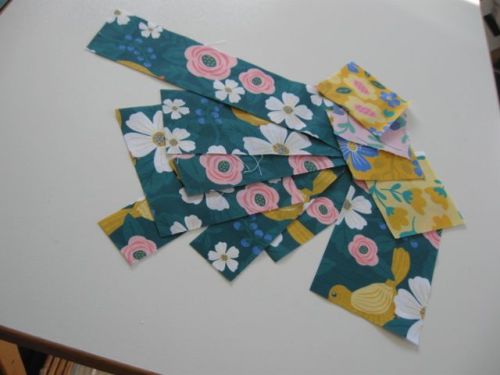 I used 5 fat quarters of the prints, 1 3/4 yards of white, and about 1/3 yard each of Paintbrush Solids teal and verbena. I will use an additional half-yard of either of the solids for binding.

On to pin basting and quilting. (One way to keep tops out of the to-bee-quilted black hole is to have a deadline. )

The sewing on the Paintbrush Studio Fabric project was finished a couple days ago. I did the photography yesterday and today. Of course the overcast days were while I was still sewing–quite sunny today. Anyway, finished and sent a day early. I rather like working at a slow and steady pace instead of a last minute rush. I’ll have to do that more often. 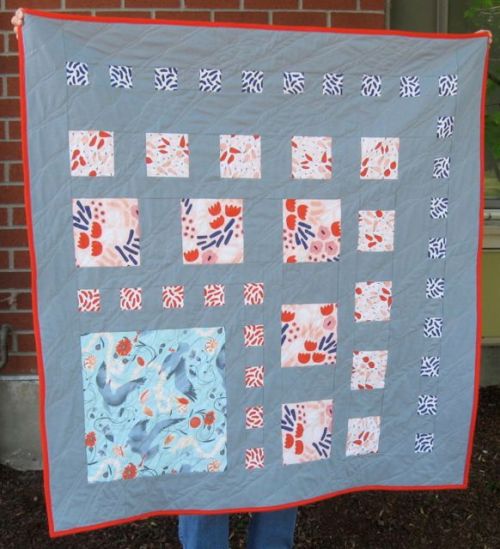 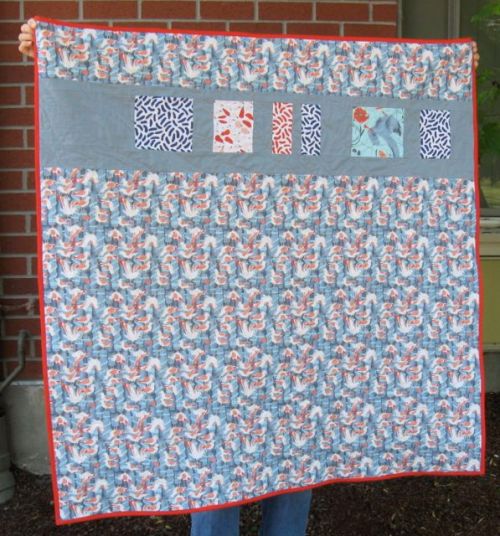 I make a lot of quilts just a bit over the width-of-fabric measurement, and I prefer piecing a strip to buying and extra length of the backing for a couple inches. It is also a good way to use left over fabric, though I have a few scraps.

I had just read Jacquie Gering’s Walk and decided to try diagonal wavy lines with the walking foot. For the most part it went well. However, twice I ended up with a line of eyelashes on the wrong side (more than I have ever had when doing free motion). It seemed to happen when I tried too hard to make too big of a curve, but the odd thing is that it continued after I went back to ordinary motions.  The fix was to take the bobbin out and put it back. Go figure.

And in addition to diagonals, the gull print suggested loop d’ loop, but not too much. So I put in the free motion foot and did a couple spaced out rows of loops.

And now for a couple glam shots 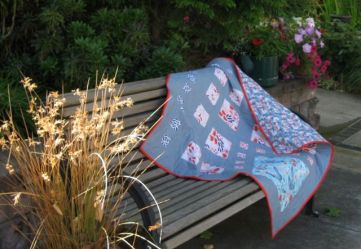 I had to do some serious cropping of the left photo because I’d managed to include garbage dumpsters at the curb! That photo is from the park across the street where the trees are off to the side and the middle is wide open space; the bench is in the patio behind my apartment building.

From Sketch to Top

Progress is happening on the PaintBrush Studio project (sketch and fabric here).  First I got permission to change the background. Glad to know the option remains to select from the whole of Paintbrush Palette–though they supply only from their selection.

And the beginning looked just like the picture in my head. 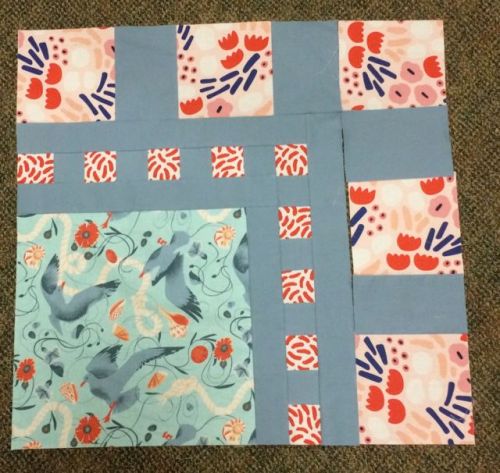 I’m really glad I could use that grayer blue, called Haze.

Then I finished the top. 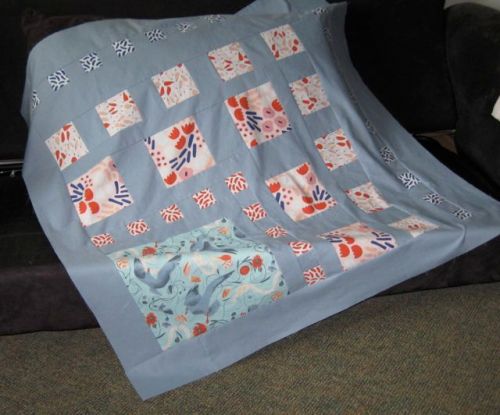 The fourth row doesn’t please me quite so much.  Looking at the whole piece of fabric, I ddn’t see it so white as it became once cut up.  Do any of you have tricks to help see that difference? I am not disappointed enough to do any ripping, as usual. Nor do I think I’ll make another top with one change.  But if I were, I’d make the fourth row of 4-inch squares of the backing fabric (shown in the above linked previous post). It will be better with the red binding.

On to making the back.

I’m trying a new thing. I applied to a  Paintbrush Studio Fabrics  request for people interested in making things with PBS fabric. ( I don’t remember if it was an email request or a link on their website.ETA: it’s a link on their website.) (ETA: Program discontinued and there is a new variation. April 20/0). They send an email with their fabric selection and some prompts.  Receivers submit descriptions of what they want to make with it and how much fabric is needed. Then PBS sends fabric to the people whose projects were chosen.

I was too busy to consider responding the first two prompts they sent. There were second requests showing  quilt pattern possibilities for the fabrics. I figured when I was ready to submit I may be in demand. And this month my idea was created and accepted.

Here is the sketch (each square is 2 inches) 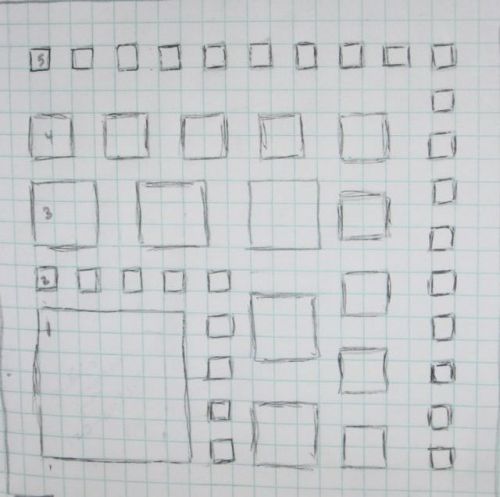 And the fabric arrived today. 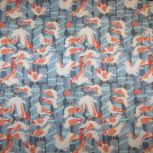 I’ve combined pieces from two lines: Gulls Just Wanna Have Fun (designer’s name, other than Paintbrush Studio not given) and Maja Ronnback’s Garden Glory. And Painters’ Palette Solids, of course. I’m rethinking the background shade of blue, but don’t know if I can make a change after a project has been accepted. I’ve asked.

I think the design is a good way to showcase fabrics. I had done something similar with fewer fabrics in the past (here). This seems an easy arrangement to vary. Maybe a series? Time will tell (unless 2 makes a series. )

It is destined for my local guild’s charity program. The size (46 x 46) can be either a child’s quilt or a lap quilt for a nursing home resident.