I’ll leave it to you to decide whether the scraps are attacking me or I am attacking them. You may have noticed the new button “I may have a scrap problem” in my sidebar. It leads to Confessions of a Fabric Addict’s  scrap posts. Here is the link to the plan behind those posts. Guess there are linky parties on the first. Since I’m late to the party, all I did was survey.

Is pulling a random task from the twelve required?  Or just scrap management consciousness?  I’m not sure I’ll pull a task and follow through on it for a month as she does, but there is value in listing tasks.And doing SOMETHING.

Maybe if I do even a little bit of this, I’ll have something to show on the 15th  of each month when Kate posts the Scrap Happy list.  You might enjoy looking at the progress of other Scrap Happy folks (here).

Linking up with Oh Scrap! Some people are beyond organizing and actually have projects going–go see!

Given my schedule this month, I’d best take a small task.  #7 fits the bill. Linking this post that was late for January. Button in sidebar.

Possibilities of the people

This week’s photo theme is “possibilities.”

And I think people–and dogs–gathered for a demonstration expresses the possibility of political change.  (I thought I had the cute white dog as well as the sign, but he hid as I snapped.) This gathering, far south of Occupy Portland, supported them as well as expressing its theme of Jobs, Not Cuts.  Since it was a coalition, we also urged single-payer healthcare so that healthcare is not dependent on holding a job and the elimination of corporations as persons in order to get democracy back into the hands of the people. The site, the park under Sellwood Bridge, was chosen for a special reason. 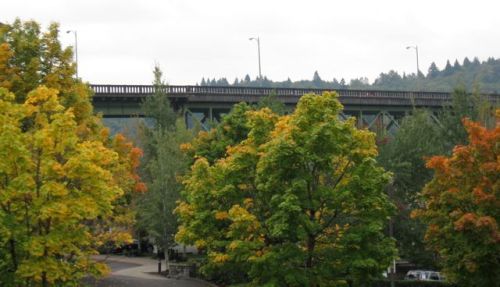 The site was chosen to emphasize the need for maintenance on infrastructure.  On a scale of 1-100, the Sellwood Bridge is rated 2. Remember the bridge that collapsed in Minnesota?  It was rated 50. Improving infrastructure would have two beneficial effects: upgrades and jobs for the people.

I sometimes wonder how much to hope from such gatherings, knowing how much more there is to do than gather. But this I also know.  Doing nothing will accomplish nothing and keep the 1% rich while the rest of us 99% get poorer. And so we gathered, encouraged each other, expressed our goals, and we hope to ignite interest in others as they get more informed and to awaken the politicians to the people.

Tagged as infrastructure, Portland OR, Sellwood