After two days, I begin to think I might actually finish by the 20th–my goal so that I won’t have to pay extra postage for 3 day or (gasp) 1 day service.

I finished the hand work this morning, made the big pattern, and made a mess looking for fabric, Then I started the improv part. I’m not trying for any realism, like making people shapes. I’m just aiming for the energy of the crowd. 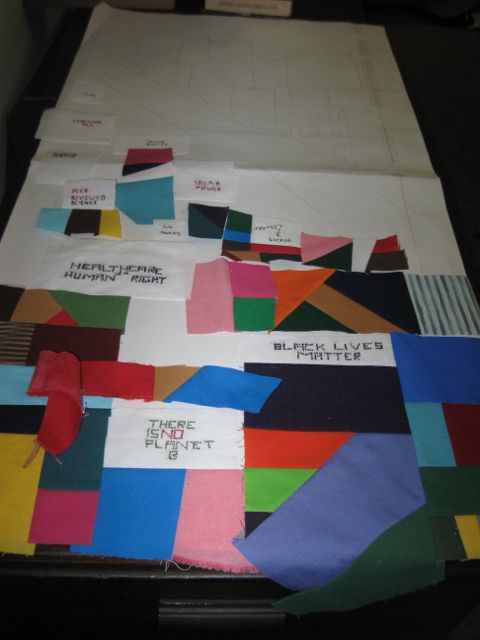 Some pieces are attached; some are just placed to audition. At first it was hard to make the pieces as big as I wanted the for the “front”; then I had trouble sizing back down for the “distance.” So there is some adjusting to do.  The embroidery on the “posters” didn’t end up graded in as many sizes and I’d originally intended, but I think it will do.

They get quite small in the back. 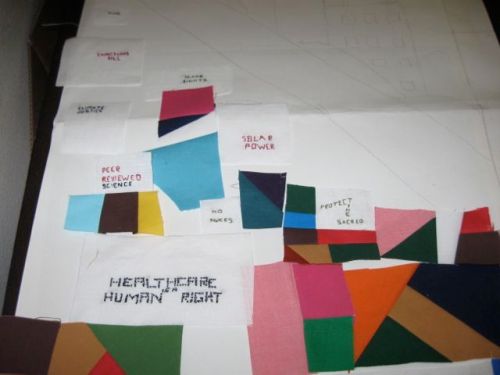 I see my sketch of the “city” at the top is too light to show. The smaller sketch is here, in case you didn’t see it a couple days ago.

The plan is to finish the improv tomorrow and maybe start the “buildings.” Another day for quilting and another for facing and label and hanging sleeve.  I might not have to cancel any activities and still have plenty of time to finish. Optimism is a good thng, right?

Linking with the Clever Chameleon’s Colour Tuesday and Oh Scrap!

Whew! I got the top finished in time to enter it. It retains some of the ideas in the sketch (here) Given the shortened time frame, I needed to simplify some more, so the “foam” went. I made a mistake,so the deep purple went (I was sad to lose it). And the “foreground greenery” went because no fabric that I had looked right. I didn’t overlap any of the circles because I wimped out. 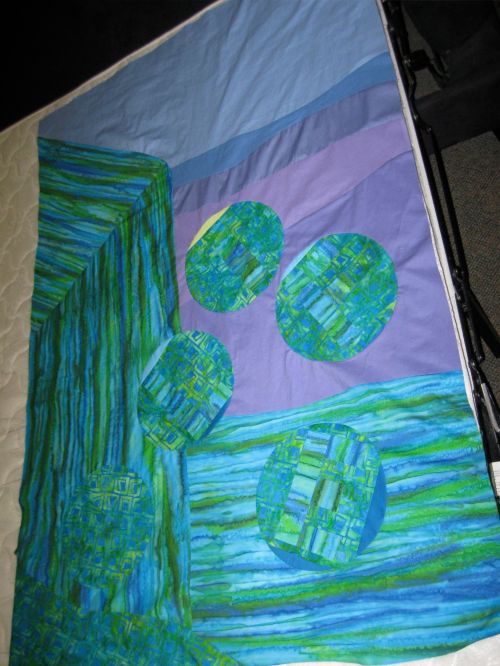 You may remember I wanted to draw some attention to the letter bubbles, but not too much.  I thought a little light and shadow might do it. I had already made the circle templates and didn’t want to make a new set (not the best of criteria for design decisions). I thought of free handing some curve to the colors to be added, but wimped out.  I decided a straight line wouldn’t hurt.  But it kinda made the circles look like eyeballs or space ships. And without the “foam” they don’t seem to be splashes from the waterfall, as originally intended. Oh well, maybe they are something else relevant. I do like the aqua against the lavender that I’d not have had if I’d gone with the foam.

This is the first time I’ve inserted circles onto a whole (almost finished) top instead of into blocks. Others have done it, so I knew it was a possibility.  I won’t rush to do it again (until the next design that requires it). Managing the bulk of the top while sewing the circle is so much more awkward than handling a block (in addition to the stress factor of cutting holes in the almost finished top).

I will admit to holding my breath each time I got to the end of the circle seam. The first four fit perfectly. And of course the stress level rises with each finished one–can’t ruin it now please, as I sew the next one. The fifth wanted to make a tuck at the end. I checked and saw that my seam had dipped in on the circle piece about 1/16-1/8 inch for about 6 inches.  I ripped that and tried again. When the two seam lines met exactly, the circle fit the hole. Breathing a sigh of relief there, I was!

The finished product isn’t due till May 31.  I think I’ll continue on with making the back and quilting it so I don’t have any more last minute panic.

Linking with Nina Marie’s Off the Wall Friday and Finished or Not Friday (Links in sidebar).

Moving on to my next project with a due date.  This one is for the guild’s area at the Sisters Outdoor Quilt Show in July, but a photo of the top is due in a week. The guild’s theme is that we use letters.  Early on I had decided I wanted my letters to be subtle, not the first thing viewers notice. To accomplish that I’d have two fabrics either very close in color or the same color with a print on one, something like that.

I started sketching soon after the theme was announced. The first ideas were quite wordy. And maybe preachy. 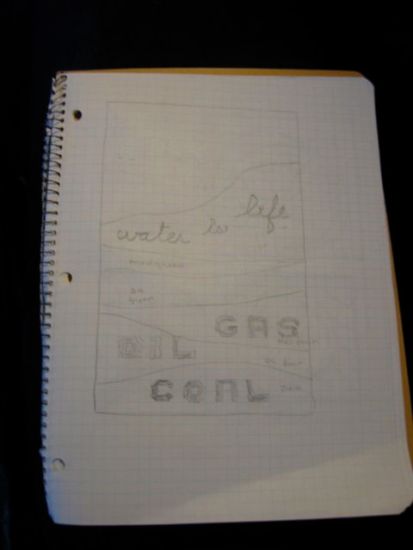 The layers would be black for coal, brown for oil, another brown for gas, a couple greens, blue for the water (the cursive writing would be quilted in), then a couple purples, maybe yellow, then blue for sky. I’d considered quilting “solar” in the sun if I included it and the icon for wind–puffy faced cloud blowing in the sky. It needed work, so I sketched again. 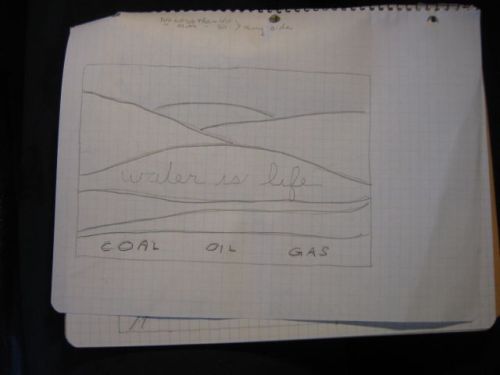 This one eliminated some layers but kept the other ideas.  It also looked like something I’d been seeing a lot of. So I let it sit a while. Meanwhile, I went visiting fabric stores while in Lincoln and Omaha, NE.  And I found these. 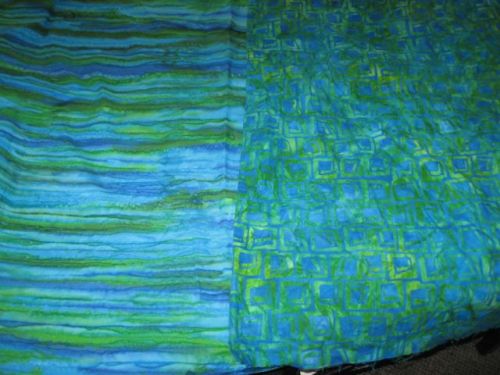 They seemed the exact sort of similarity with subtle difference that I’d been looking for, only I’d planned to quilt the words on the water. Time for a new sketch. 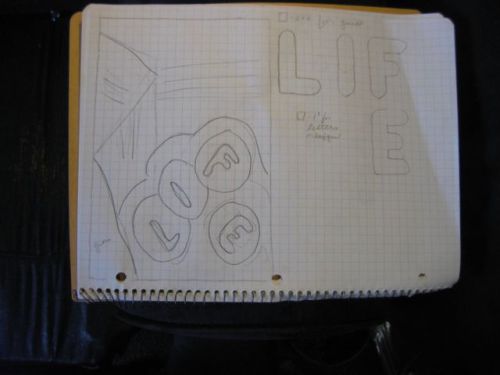 A waterfall with one word in its “foam.” And I drafted the letters.

And there it sat while I did other things. Today I started auditioning fabrics and making the letters.

It didn’t take long to yank the bright red-violet out.  But I remain quite undecided about the stone/greenery for the foreground. I like the lighter blue for the sky but it will be tricky to get enough from the fabric I have.  Since I don’t have to have that decision made in order to make the letters, I’ll sleep on it.

And here are the letters. 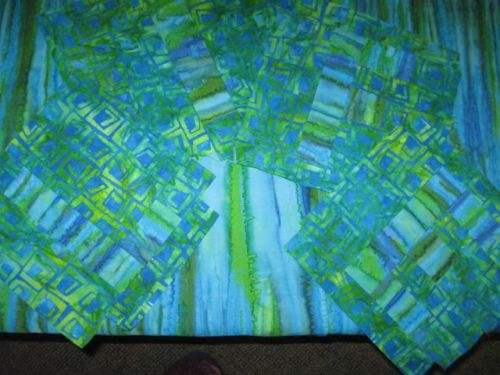 I need to trim the letters into circles. There will be some overlapping. I will proceed without an exact idea, and lay out the fabric and cut on the spot.

Linking with Needle and Thread Thursday, button in the sidebar.

Most everyone voted for a red binding earlier; I agreed. So red it is. Riley Blake confetti cotton red. Luckily I’d bought a couple reds and a darker teal when I was RB shopping.

Since today is the final day for submitting to the Modern Quilt Guild’s Riley Blake challenge (#mqgfabricchallenge), it is a good thing the weather, my quilt holder’s schedule, and my schedule cooperated for the photo. (The binding has been stitched for about a week.) I lost a little width and length because the sides were more irregular than I’d realized when measuring earlier. After trimming to the smallest on each side, I ended with a quilt 49 x 68. Close enough to the 50 x 70 goal. 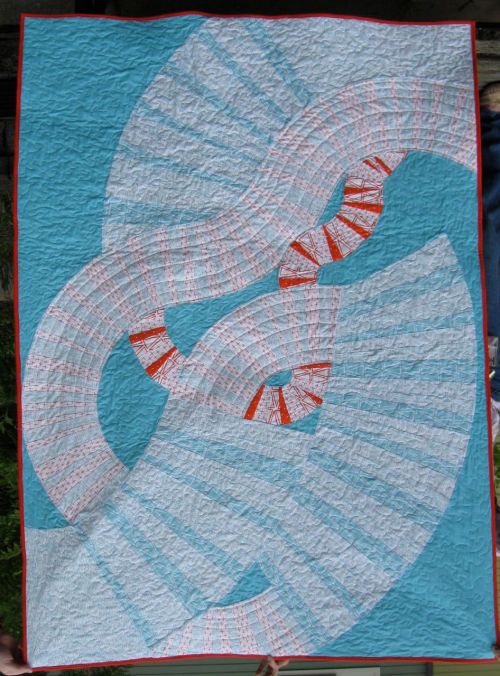 Does it look like the quilt is defying gravity?  I was in such a hurry to catch the sunlight just right that I neglected to have the top on top, so yes, the photo is rotated.

Just in case you don’t read back to the beginning, I’ll repeat my design source.  I was following Sherri Lynn Wood’s Score #9, Get Your Curve On from her Improv Handbook for Modern Quilters.

About ten days ago I was arranging pieces (here); now it is quilted.

I was about to quickly sew one seam to make the back. Luckily I had the smarts to lay it out before stitching (I had cut the yardage in half, though).  Oops. I’d needed 3 yards, but purchased only 2, operating from memory, not measurements and math. Must have been memory of a smaller quilt. Since the quilt needed to be made of Riley Blake fabrics for the challenge, I got out the print pieces left over and found enough to add. (There went all hope of eking out enough of the background for binding.) So I ended up with this. 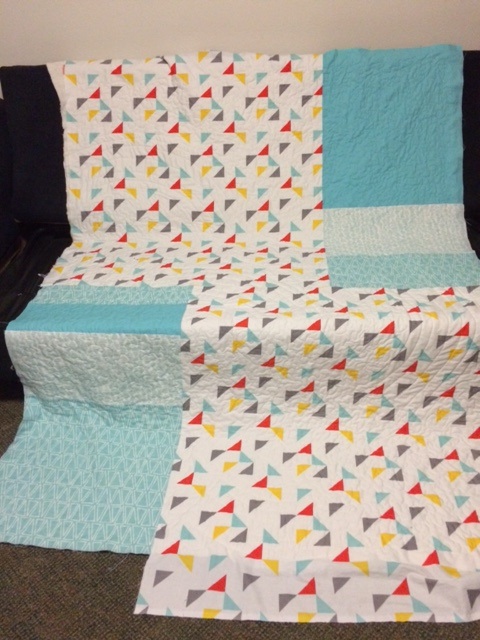 Someday I’ll hire a full time quilt holder and take straight photos, meanwhile the sofa will have to do.  The mood of the back is quite different from the front. The main fabric was purchased with more red planned for the front and sharper divisions between pieces.

All along I had oriented the top this way. 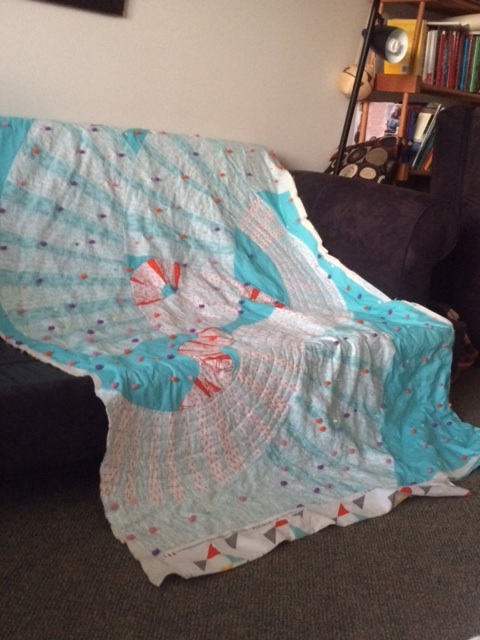 When I finally got it quilted, I reversed it. 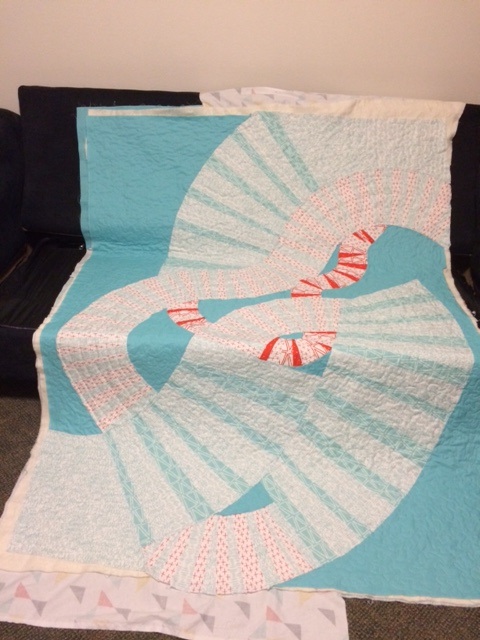 And I like it better this way. Not sure why. Maybe the two aqua rows were too top heavy the first way.

The quilting is fairly simple: lines following the long curve made with the walking foot; the red curves free motion quilted–some zigzags to flatten the lightest red wedges, an X in the triangle print, and nothing on the red with white dots. All the rest a moderate size meander.

I gave brief thought to doing fancier quilting, different in each wedge.  However, because I’d preferred the blended look to a graphic look, it seemed unifying the pieces was a better choice this time.

I still have plenty of time to bind it by April 30. (And the Threads of Resistance piece is quilted too, but that is another post.)

ETA: Linked with Freemotion by the River and AHIQ

In a non-quilting day in which to ponder step 1; I decided that squares would not do the Utopia fabric justice; plus I had odd-shaped pieces left from the first quilt. 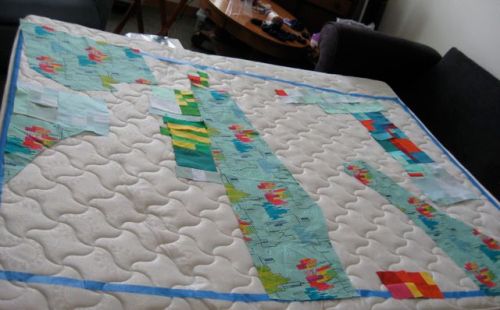 In case you didn’t guess, the arrangement is subject to change. This looking and rearranging is the part of improv that I enjoy the most. The only thing that hurries me on is the need to fold up the Hide-A-Bed; it takes up the whole living room walking space.

I remember now the ah-ha from the first try; I need more big squares. So I cut a bunch in each of the colors and am ready to start stitching.

I think using left overs from quilt 1 qualifies this as a scrap quilt even though some of the solids are new yardage, so I’ll be linking to Oh Scrap! (button in sidebar).

I love this fabric: 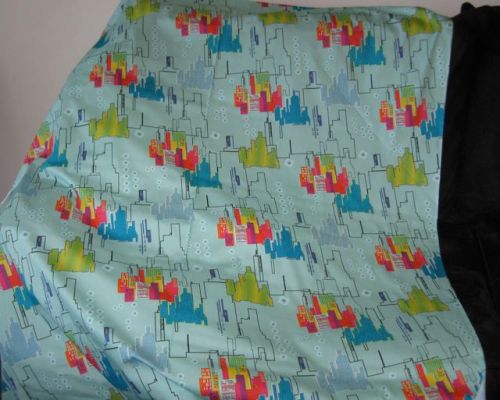 I looked at it longingly, then resisted. However, for Christmas I got a gift certificate, so I indulged. I brought it home to see how many solids I had already that would work with it–then I will shop some more to fill in the gaps.

The trouble is I don’t think it was intended to be cut up.The flow of the repetitions, the modulations of the landscape from the red detailed city to the blue silhouetted and gray silhouetted skylines, to the outlines. Moving the other way, the aqua alternating with the green and yellow and the outlines.

I am not usually one who has difficulty  cutting up fabric. But I am studying this one to see what shapes will retain that flow.  Not a big center with borders. That seems too easy. Besides, while it is out for study, I can read a book and glance up occasionally and see if a new idea has surfaced. Pondering and procrastinating are kinda related.

I’m leaning toward improv using Sherri Lynn Wood’s Improv Handbook for Modern Quilters (review here–I have reread and bought the book since that review), but which “score”?

I’ll link with Molli Sparkles Sunday Stash and will go see what others have found.