It’s not easy to do a little free-motion quilting each day. I thought I’d practice on crib quilts, but when I put a crib quilt under my Featherweight, I don’t want to take it out till it is finished.  And that ties up the machine–usually four days. Now the 12.5 inch block is another matter. It can be finished in less than an hour even when doing a closely quilted design. So I’m working on blocks for Soy Amado.

First I looked for orphan blocks twelve inches or less from block lotto winnings and other swaps–the smaller blocks got additions to bring them up to 12.5. All total I have eleven. Three finished.

This is Leah Day’s “Cube Storm” filler design. Well it started out to be. I ended up doing something between an angled echo/meander and her design. (I add links to Leah’s designs so you can see what I was trying for.)

Leah calls this design “Josh’s Ladders,” and it seemed perfect for this fire truck block. I probably spend as much time browsing for design ideas as practicing. That is half the fun.

You know how they say to hide beginner quilting, use prints? Well it hides it all right. It even hides it when I am trying to echo or travel stitch. Maybe not a good idea for learning. But here is “Snake spines.” 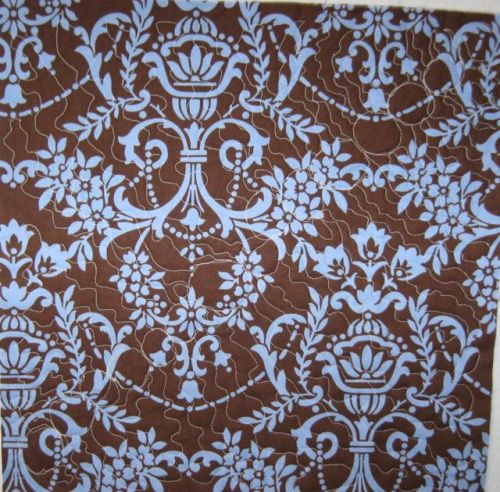 Mine got a little more wiggly than Leah’s instructions. Actually I”d forgotten the name of the design and started to think centipede and other crawly bug images as I quilted.

So far the stitch looks about the same on the back as on the front. And that’s good.

And for those of you who like linky parties, here is aother fun one–Val assigns themes and we link up old posts that relate to the theme. This week the themes are Batiks and quilt backs.

Now it is time to go practice.

Seems I’ve been saying, “After X I’ll start quilting…” for a long time. Actually it is since the Sisters OR Outdoor quilt show and classes. There was always something else that needed to be pieced first. I didn’t run out of things to design, but had no pressing due dates, so I headed for the box of tops waiting with backing.

Oops. not prepared backings, but fabric for backings.

The first three I tried would need to be pieced to be large enough. Then there was the issue of thread.  I piece with gray or cream, so haven’t thought thread color for quite a while. Finally found one with thread on hand and a back, a top I’d started in August.

I had done some practice and, for the most part, could maintain an even stitch length. I outlined the monkeys and did pebbles around them.

I didn’t want the whole quilt to be pebbles because I wanted the quilt to be softer. (It is infant size, 36 x 36.) But I wanted something special to highlight the monkey row.

I moved on to the other lighter squares, saving the dark green for a later thread change.  Since I like high contrast, I’ll probably always be dealing with thread changes–or become confident enough to quilt with contrasting colors.

I decided to put a large spiral in each light 4-inch square. I practiced with pencil and paper and thought I had it. Nope.  I had a hard time keeping the curve curvy. And something was wrong with the center where I changed directions. I studied and studies as I quilted new squares. Even after I figured out the spacing issues, it took till the sixteenth spiral to do it. 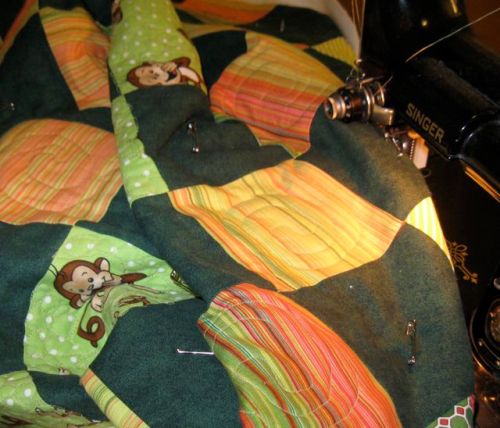 I did practice the design in a small scale, but I think problems show up more when it is enlarged.  I do some practicing on swatches that are sandwiched, and some on quilts for children. Remember the mantra?  Altogether now: The kids don’t care.

The spiral makes me think of the monkey tail. On the dark green I’m going to do arches that suggest the grinning mouth.

ETA I tried sketching the “smile.” I didn’t like it so I’ll opt for a simple zig zag. Linking up with Leah Day’s Free Motion–see button to the right if you want to check on other’s stitching. I hope someday FMQ is as easy for me as it looks for her.