It’s that time of year when lights appear all over town.  So far I’ve seen Crale House, Peacock Lane and the Christmas Ships.  This year I made it to the zoo for its display. I was too busy gawking to take many photos.

Although there were some themed lights like the nativity and Christmas trees, most of the lights were animals or lights densely placed on tree trunks and branches. At one point we walked through a tunnel of lights so solid as to be almost disorienting.

At the beginning I was intrigued by the snake.

One of the few snakes that looks harmless.

Midway a group of animals and trees 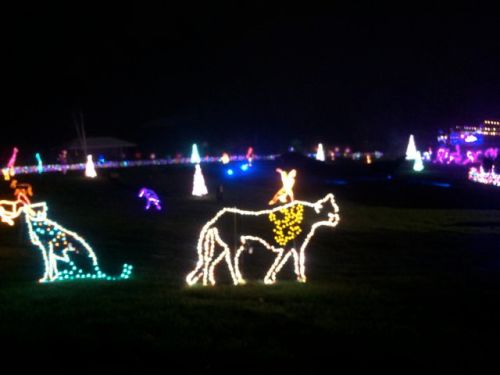 These alternated, flashing on and off to the rhythm of music. Timing the camera to the scene was difficult. I missed the two bright pink hippos and a bright green alligator. It would have taken video to do it justice.

And near the end, a dragon.

Other effects, impossible to catch in photograph, were an eagle appearing to be flying and a peacock opening and closing its tail feathers. Some children identified another exhibit as scenes from Wicked.

There are two ways to view it walking the marked path or by train. I’ve been told each is quite a different experience, so I may have to visit again.

Filed under Portland OR

It took four years to learn of this light display half a mile from where I live. I’d heard of the Christmas Ship Parade and gotten there twice. I’d heard of Peacock Lane, and finally got there this year. Then I heard of Crale House. The linked article says their December electric bill is $500.00, and that was two years ago. My first visit was Christmas Eve, but light rain hurried us through a bit. A clear night tonight prompted a second visit. This display demands you get out of the car.

Arches cover the sidewalk along the two lots that are lit up.

Santa’s reindeer fly above the gingerbread house. Several other exhibits lined the fence, but all my photos did not turn out. The exhibit goes deep into this side lot where one path leads closer to the nativity. 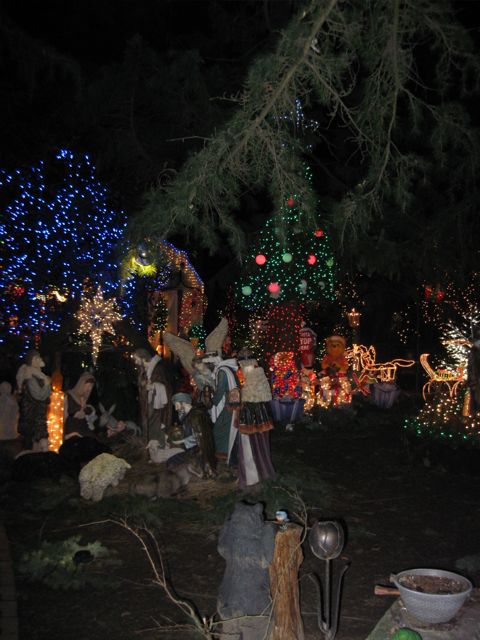 Another path leads to the front of the house where there are exhibits in two picture windows. One has animated bears and the other a village.

The train was going round and round; there was a figure pulling a sled and skiers and a ski lift in motion. (Apologies for the flash glare in the glass.)

This window brought back memories of my grandma’s Christmas tree that always had a little train traveling around the village under it.

Filed under Holidays, Portland OR