A guild quilt show coming up does help UFOs become finished pieces! This one has been in ‘to be quilted’ limbo for quite a while. One reason was that I couldn’t decide how to quilt it. Usually I have a focus to emphasize or some lines that get me started, but there was nothing like that on this one. As the deadline drew near I went with my default, meandering.

I did consider an angled meander instead of curves. I always ponder whether to echo or contrast. I thought curves contrasting to the straight lines of the piecing and print would work. And it is the easier of the two, for me. Sorry, no quilt holder available; maybe a better photo at the show.

I haven’t actually measured the finished piece yet; 50 X 70 is the target size.

This quilt was also inspired by Sherri Lynn Wood’s Improv Handbook for Modern quilters; it is Score #1, Floating Squares. Sherri makes two suggestions for edges: cut them straight (as I did for Mint Swirl in the previous post) and follow the curves that form naturally. I tried the latter on this quilt. To deal with the curves I made bias binding. It worked pretty well.  I had most problem with the down curves. 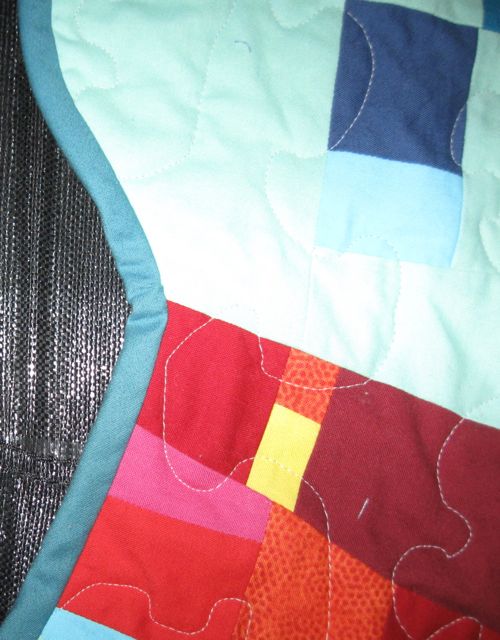 This is the worst curve, and I’m hoping it doesn’t show much after being washed. Possibly a single layer binding would have helped (I always make double layer). But  a gentler curve would have helped more. Next time I won’t be so stingy about losing fabric as I create the edge.  I did feel that I had to do the binding the traditional way, machine stitching on to the front and hand sewing the back. I’d not factored that into my time allowance, so cancelled another outing in order to work on it.

The finished quilt doesn’t look much like the picture in my head.  I knew this when I had it laid out and was assembling it, but didn’t know what to do about it. It came to me while quilting. The background needed to have been closer to the background color of the print fabric; then the line between the print and the piecing wouldn’t have been so sharp and the two would have blended better. Also instead of the three areas of color I had planned with most of the red in the middle, maybe I should have used pieces to actually extend the partial city groupings in the print wherever they occurred. The quilt is okay this way, just not the look  I had aimed for.

So my three pieces for the show are finished, but I still have hanging sleeves and labels to go.  I’ll have no trouble meeting a new challenge. Annie’s Ruby Slipperz has a challenge to sew 30 minutes every day, 6 out of 7 for the month of May. (It is early May, you can join in. Information here and here.) At the end she will do a drawing from those comments on the appropriate posts of hers–once a week, I think. Commenting is more important than actually sewing every day for the drawing. This challenge might keep me sewing after these three are labeled and delivered.  Often after a push to deadlines, I take a break. This time I’ll try not to. 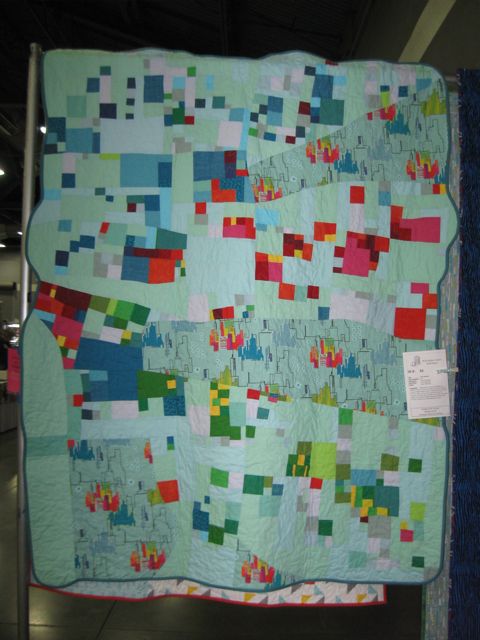 Finished top (way back in July)

Early assembly and arranging and rearranging

Skyline, the quilt that made the scraps

I still have a long, narrow piece of the Utopia fabric. And a couple ideas.