Scrap Happy day and a scrappy finish, such synchronization. Started as a leader/ender indefinite project (here), this one got a nudge when I was surprised to become a great-great aunt again. It seemed good to finish while 36 x 36 is a usable size.

As I’d said earlier, I thought all that open space asked for something other than an all over design. I like dense quilting, but I usually find it daunting. However, it seemed doable on this small piece. So I started with squares in a square from Angela Walter’s book about ideas for quilting in various shapes. Then pebbles are always fun. At one stage I had planned spirals in the background so thought to add a couple among the pebbles, but stopped at one. Seemed more would look too crowded.

I’d been watching Christina Carmelli’s (afewscrapes) daily videos on Instagram. One of her ideas had been a combination of pebbles and lines. Seemed good for the star points. I had expected it to emphasize the points more than it does, but I still like it.

By the time that was quilted I could see that spirals would be too busy for the background. Earlier I had thought about Christina Carmelli’s elongated meander but abandoned it because I didn’t know how to deal with the direction change. I returned to that idea and got the idea of mitered corners and marked the diagonal with painters’ tape for a guide.

Quilting in the pieced border is my go to design when I want an angular look. ( I will look up the tutorial and add it later and credit the designer. )

You’ll notice the unquilted white border. I thought I’d try something new. I have trouble with quilting going beyond where binding will be, and I wanted the motif to be centered. So I tried binding first. And it worked. 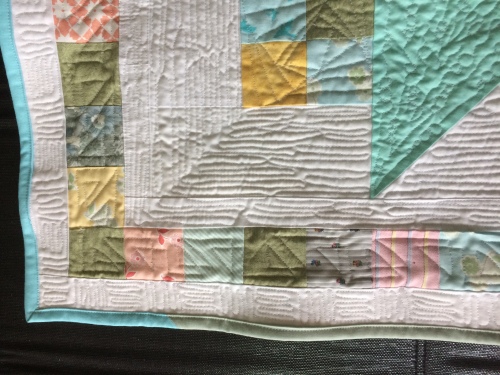 The binding kept it firm enough that handling it with so little edge was not a problem.

The binding used up the ends of those solids, and I hope made the two-color star points look more like a design decision than a fabric shortage. Even the batting was pieced from two leftover bits.

To see other scrappy creations visit Kate’s Tall Tales from Chiconia for her post and links.

I’d love to link, as usual, to Oh Scrap and Free Motion Mavericks, but last time I tried from my so-called smartphone , it didn’t work. We’ll see this time.

And in case this is the first post you have seen about this quilt, and you want to make one too, head over to Wedding Dress Blue ‘s blog.

6 responses to “Star Kissed #1 is Finished”