I recently signed up for Elizabeth Barton’s “More Abstract Art for Quilters” through the Academy of Quilting, and it has been fascinating. It moves quickly, so I am gathering potential projects.

Most likely I will not make all of them.

I like this one but I don’t see myself making all those circles out of fabric. Maybe someday if I run out of other ideas I could do it as fused applique or reverse applique. Time will tell. That was the first week.

This project at least has straight seams. The top grid was deemed stronger; the bottom one had the major flaw of being split in half horizontally. Multiple assignments followed.  Do several value studies for the top one; crop the bottom one into something useful and do value studies. But before I got to that, Lesson 3 came along. So this one moved into the potential folder.

Of course there have also been comments about and links to observe well known abstract artists–totally fascinating. The third lesson involved watching Mondrian’s path to increasing abstraction and the assignment to follow similar steps from a photo we had taken. So far I have only the photos to ponder. 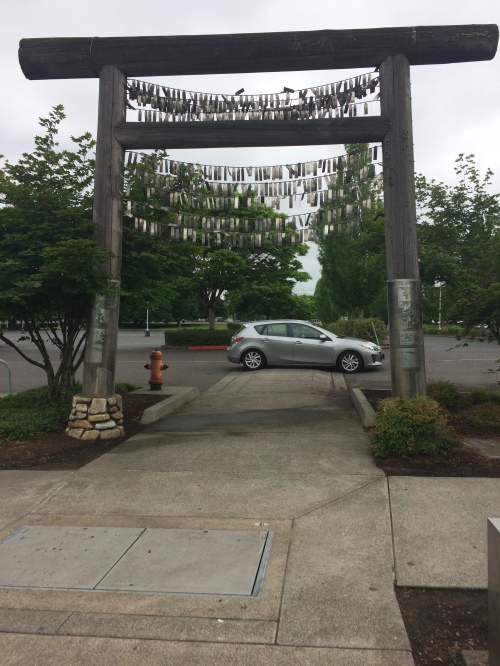 The car wasn’t there when I composed the shot, LOL.  And I will just ignore it as I work with this photo –if it is the photo I choose to work with.

I lean to working with this one.

That ends thoughts on art quilts for today; continue reading if you are interested in the photos of torii. I was attending a Vanport Mosaic event, and they are located at the site as well as integral to the weekend.
It is Vanport Mosaic weekend, a time of memory activism.  The story of Vanport is not well known, and the Mosaic project’s purpose is to unearth and perpetuate minority stories that have been silenced. The Vanport story is a story of race relations, some successes and some failures. The town of Vanport was constructed by Henry Kaiser because he needed housing for workers he had attracted from all over the US for his shipyards during World War II, and Portland was dragging its feet because many of the people coming in were African American or poor. The housing was segregated, but schools, work, and entertainment were integrated. Since families worked shifts, there was 24/7 daycare provided.
After the war, there was less need for workers.  White workers moved into Portland, an option not available to black workers.  Others moved into the vacated homes, they included veterans, Native Americans, and Japanese, who were returning from the concentration camps where they had been sent during the war. The torii are a memorial to the Japanese experience, an experience that is another major feature of the weekend.
Memorial Day, 1948, Vanport was flooded.  Residents had about an hour to evacuate with what they could carry. The town was totally destroyed. (For those interested in more, here is a link to the online Oregon Encyclopedia entries on Vanport, and here for the Japanese incarceration.)
The Mosaic project includes gathering stories from folks who lived there and filming them. The day, an annual event, includes showing the films, other exhibits related to the town, the flood, and the imprisonment. Often classroom projects are shown. This year one was from a human geography course with proposals for a more visible memorial than what exists.

Unless I get a lot accomplished on this week’s assignment and post again, I’ll link this post to Nina-Marie’s Off the Wall Friday (button in sidebar).

6/1/2019–ETA: Today was a play, Gambette, about the Japanese experience.  Here, from an exhibit in the lobby,  is a photo of an enlarged tag like those required to be on each person and item of property.

These are memorialized in the rows of metal tags on the torii sculptures.

6 responses to “More Thinking than Sewing (and Vanport Mosaic)”