Floating Squares 2 Top Finished in the Nick of Time

I finished the top last night around midnight; that left this morning to transform the studio back into an apartment and wash the dishes that had piled up while I frantically sewed.

50 x 70 — irregular edge and teal binding planned. Orientation is sideways–blue is the top.

Product people can stop reading here. Process people, for you I remembered a couple before and after photos.

When I started working on the blue section, I thought it was getting too checkerboardy.

So I scrambled to make some combination blocks more like among the reds here.

That turned out to be overcompensation and way too dark. So I tried rearranging.

I liked that till I sat with it a bit, then the long filler lines on each side of the remaining dark segment distracted me.

The solution–shifting left and adding mixed light and dark.

While there are still some checkerboard moments, they seem less obvious with variety around them and among more colors. Finally I was ready to move on.

In her book, Sherri talks of quilt edges in two ways. The traditional squaring up straight lines and keeping the curve created by the non-uniform pieces. Until I started assembling, I’d not seen the value of the latter. But then I saw edges like these:

In each case there was a lot of piecing I’d not want to lose by straight cutting; nor could I move the segment in farther. There was some aspect I needed where it was placed. So I’ll be using an irregular edge.

Have I mentioned how much I enjoy curving he seams to follow irregularities in piecing? I should caution that it adds about thrice the time to the project as straight seams do. (If there is a long way to do something, I am sure to find it.) So I do a mix. Some considerations I make to choose:

While the first question is primary, the next three can override it.

Most of the curves are gentle.  I learned some things about trimming. It is easier if the pattern piece is placed to the left and the piece to be cut to the right (I am right handed; left-handed people might reverse this.) And when there are a couple areas with deeper overlap, something to hold onto, it is easier to hold the pieces steady. I did this trimming with scissors as I had trouble cutting through two layers where there were seams with the rotary cutter, and it is harder to re-cut a line without a ruler.

Most of my curves turned out smooth. 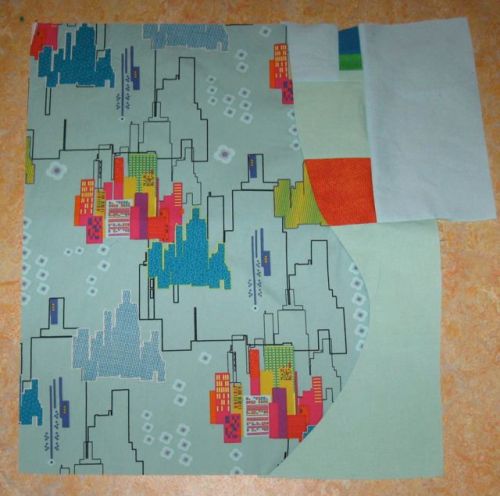 But I also had plenty of practice darting to make corrections. I pretty much pressed where the fabric wanted to go and then returned to the sewing machine and sewed along the fold where it differed from the seam. No ripping involved because curves require pressing to the side.

One other thing I learned. Large chunks of fabric “control” how the square segments are sized and sewn.  I had to eliminate a lot of large squares of the bright colors. Heavy and dark just didn’t integrate with the print.

Are you still reading? Have you run into any design issues like these?