I’ve been assembling small sections, arranging and rearranging. In the ideal world I’d have before and after photos of the big changes.  But I get an idea and jump up to try it with nary a thought of a camera.

So, here is where I am now. 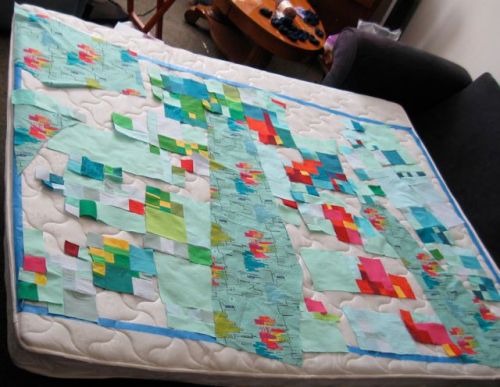 The first unphotographed layout had the bright sections lined up along the Utopia fabric, the greens along the bottom of the middle piece and the reds in a V along the middle and upper pieces. I fiddled and remained unsatisfied until I finally realized that was the big problem.

After I realized I needed some larger squares and cut some 8-inch and 10 inch squares I made some rather large sections, but when I placed them, they overpowered the print. So I ripped off the big bright squares, keeping only the big background squares.

My approach has been to start with large sections while I have large spaces to fill. Gradually I make smaller and smaller segments–now I am mostly making strips of squares and four-patch combinations. Smaller allows me to fiddle more.

You can see there are lots of empty spaces left to fill. I’ve been thinking, Two more days of work, for the last 3 or 4 days. So much for my powers of prediction. One deadline. Guests are coming on the 8th and I’ll need to fold up the ‘design bed.’ And I don’t want anything unattached at that point.