Out of one black hole and into another. Last week’s top got its back sooner than many do.  I decided to go ahead and piece it. Once I get at it, I wonder why I stall at that point so often. At any rate, it seemed wise to assemble it before losing parts or using fabric in something else by accident.

Moving from a one-yard cut to 48 x 48 makes for a very wide strip–12-15 inches. I didn’t have to see it to know it was too much solid, but here it is that way in case you need to be convinced. 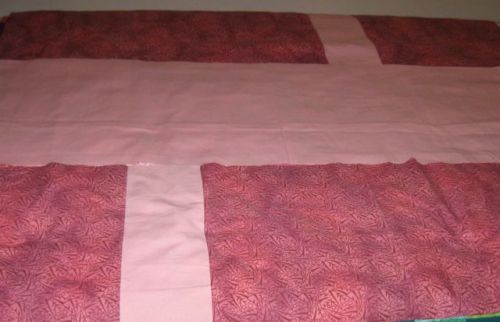 Long strips would have been an option, but I thought it would eat up too much fabric in seam allowances.

Plan A had been to divide the wider strip, except I made the first cut the wrong way for that. Actually I think I like it better the way it ended up. I like errors that improve.

I had one other fabric I could have worked in, but decided it would distract. The middle is actually a four-patch block. I rather like the way the three colors bend into the solid–two very different looks from close or far away.

One of the things I learned in an art quilt class was to vary the widths of repeat pieces and negative space between. Well, since I was using precut pieces from the deconstructed block, that width was fixed. (I guess I could have trimmed them, but again, seams shortening the total too much.) I could vary the placement of the squares. So the sequence is not quite regular nor centered.

Now it moves to the black hole of tops waiting to be quilted. I like to have 3 or 4 ready to sandwich before rearranging my small apartment space to accommodate them.

Linking with Needle and Thread Thursday (a day late)–Button in side bar. Hit “home” after you get to the site.