Lady of the Lake and Value Study

I’ve been playing with the Lady-of-the-Lake block. It started with this one. 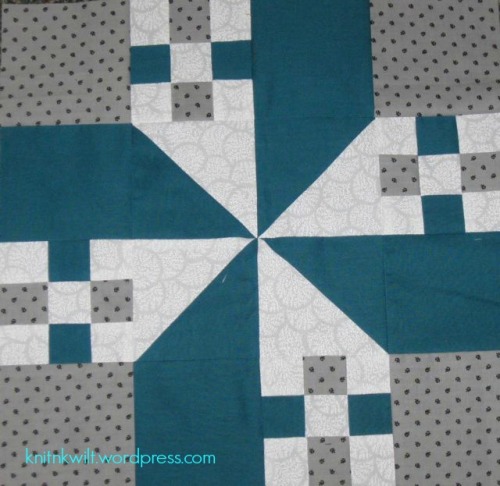 This one follows the print-solid as well as the value indication in Barbara Brackman’s Encyclopedia of Pieced Quilt Patterns.  (I rearranged the 9-patch blocks from the original, which kept them all oriented the same way.)

I tried it with reversing the lightest and darkest.

I was less than thrilled.  The design becomes incoherent with the attention shifting to the gray dot. No longer does the aqua make the motor’s paddles/propellers, but the gray tries to.  (There is an unnamed variant in Brackman’s book, #1147, with an HST in the corner and color variations that would  make the shift work.) Another problem with this one is that the floral and dot are too close to the same value. Instead of a 9-patch I see Hs. Someday I’ll try the reversed light and dark with a clear medium print. Inquiring minds want to know.

For some reason it looked okay when laid out. I wonder what makes a design change so much when sewn.

So I tried it again with lighter gray. 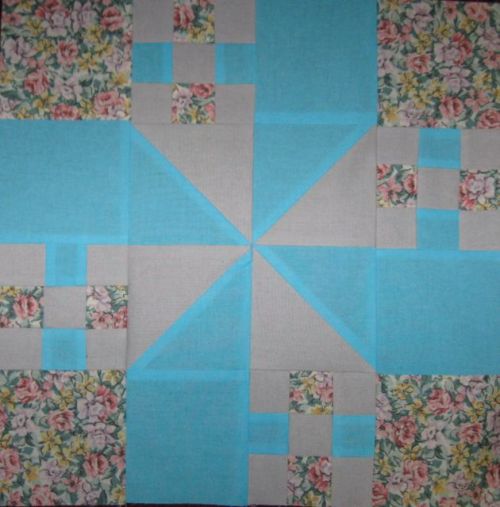 Not perfect, but much better. The background is really background. I am surprised at how dark the print reads.  It is always hard for me to determine the value of a print. But I think the brightness of the aqua keeps the propeller visible. And now I see 9-patches instead of Hs.

What to do with the dark-dot one? I auditioned borders. 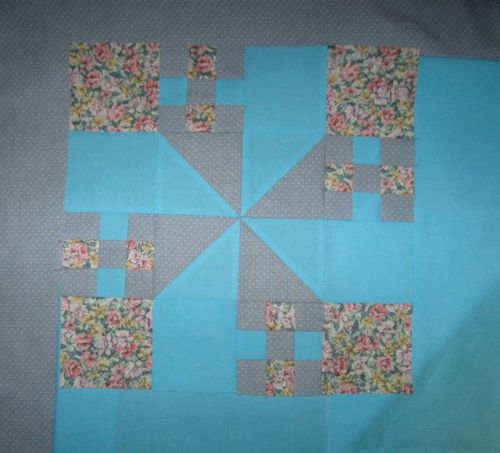 The aqua didn’t help at all. The gray helps the dot to become background (against its will). But I still see more H than 9-patch. I could pretend that is what I wanted to create. I am debating whether to do floral cornerstones or maybe 9-patch cornerstones. Whichever way, it will become  doll quilt size and I’ll have a head start on next December’s ten.

Bottom line: value matters.  I knew that, but I don’t always anticipate the final effect.

4 responses to “Lady of the Lake and Value Study”