Time to see where I am with the 50+ starter blocks shown here.  I have pressed what then was sewn (the 9-patch to two of the rectangles) and needed pressed.

It looks like a fairly big pile. I don’t think I cut more rectangles than I can use, but it seemed good to press and check. I counted 45 as I pressed them and sorted them into dark, medium and  bright. 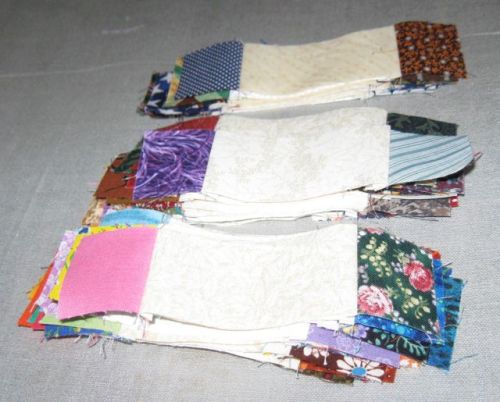 Actually I was living dangerously, attaching squares without a 9-patch to mate with it.  For the most part, I chose two that had some detail in common. Occasionally it was a color relationship, like opposites. And I tried to avoid repeating a neutral in the four sashings on a single block. Because I don’t like to do random, I took the time to choose which 9- patch to mate with which sashing+square and pin them.

Again, I chose a piece with squares that somehow related to the 9-patch, usually echoing a color in one or two of the patches, but sometimes a bright because a 9-patch was dull or a dark pair for a 9-patch that was made up of light squares.

As big as that pile looked, it didn’t finish the job. These eight remained.  These have some rather dark neutrals–I doubt I’ll rip them out. But they do require more careful combining. 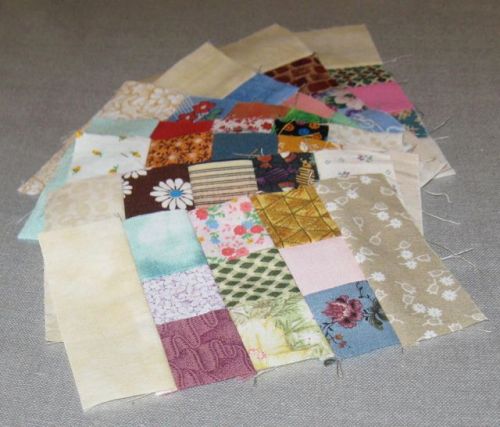 They will probably get custom selected cornerstones. The goal is for all to look like this:

And then to cut  triangles from 4 1/2-inch squares to add to set them on point. There are lots of leader-ender opportunities in this project. On the one hand it is nice to have a long, ongoing project; on the other hand, I may get impatient and just finish it up someday. After a few other projects are finished.

The blocks will be 7 x 7 finished. No harm in starting to sketch settings.

Linking with Leader and Ender Tuesday and Oh Scrap. Buttons to the right in the sidebar.

7 responses to “Leaders and Enders Update”