The town my daughter lives near, Viroqua, WI, invited members of the community to submit quilts, so she submitted two I made and one of my baby quilts.

The show was interested in old as well as new. My baby quilt is pink embroidery on white and is almost an antique. I think the figures are nursery rhymes–it has been a long time since I’ve looked at it.

The larger quilt (queen full; king coverlet) is from a Block of the Month (BOM) sampler I started with a local store in 2006 or 2007 and finished around 2010 after I had done a round robin and learned to make pieced borders.

I am following Moira’s lead (The Quilted Snail): “multi-fabric” quilt seems a better category than “scrap quilt” for when one buys a variety of reds, of greens, of golds for a quilt, thus reserving “scrap” for quilts made of left overs.

Space was such that it had to be folded in quarters. I have a full photo on FlickR; I’ll try again to insert. (Yay, I figured it out!) 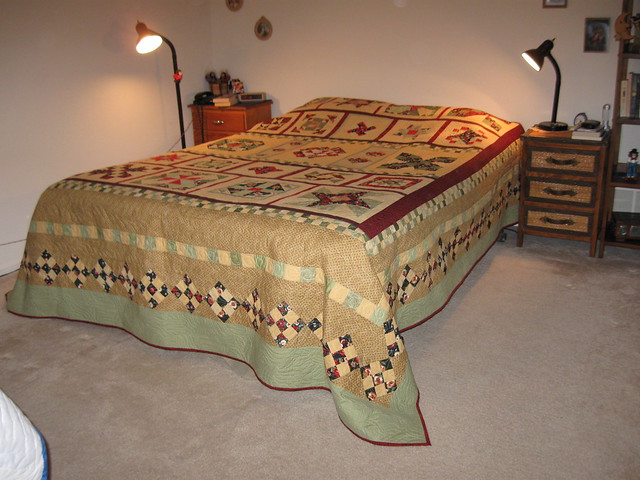 You have seen Logan’s baby quilt before, but here it is again.

Wasn’t it nice that it was at his level? We’ll let him touch his quilt.

And one more shot showing face. He almost looks guilty.

8 responses to “A Local Quilt Show”