The challenge is national, sponsored by the Modern Quilt Guild. These six fabric fat eights from the Pinwheel line of Michael Miller were handed out at the May meeting of the Portland Modern Quilt Guild with a due date at the end of June. I was disappointed that I didn’t make the due date since I really liked the fabrics. Imagine my surprise when I started seeing postings of progress after the due date! Then someone blogged about a date change. Now projects are due at  the end of July, and I might get it done in time.

It is another challenge with loose rules: Use any of these prints, add any solids, add only Michael Miller prints. The finished item has to be quilted.

In looking at the fabrics, the only thing I knew for sure was that I wanted to focus on one large flower from the upper left print. Since ideas were slow in appearing, I got out Barbara Brackman’s Encyclopedia of Pieced Quilt Patterns and started browsing. When I found Lacy Lattice Work, not only did I think it would work with the fabric, I thought it had a modern look.

Brackman has categorized and researched names for 4,000+ patchwork blocks that have been printed from the 1800s to the 1970s; it is a great source for ideas. The book is out of print, but the information is available electronically as Blockbase from EQ. This block is attributed to the Farm Journal, which published quilt patterns from 1877 to the “present” (Encyclopedia published 1995). Since Brackman doens’t indicate the dates of patterns we don’t know anything other than the possible range. Seems the really popular ones were published more than once and had more than one name, so this one may have been ahead of its time. That latter is all speculation on my part.

Instead of simply enlarging a block so that a single block will make a quilt, I sometimes arrange blocks into the pattern of the block, so I sketched that out.

Since I didn’t want a square quilt I started to play with adding length and subtracting width till I came up with the second layout.

This one pleased me more. Not only did it give me the rectangular shape I wanted, it got some pleasing asymmetry and increased the negative space.

The next decision was which fabrics to use. I’d already decided on the large flower for the center. I could have used the orange or dark gray in small pieces, but the only small piece in the block was the center, and I wanted it to be the background color. That left three fabrics for four positions. That meant I couldn’t just place fabric and chain piece the lot of blocks. I didn’t even want to make the blocks and then tinker with their arrangement. Instead I cut the rectangles, placed them to appear random (my “random” is almost always very much arranged), sat back and looked at it a while, moved some a bit, and decided it was good. 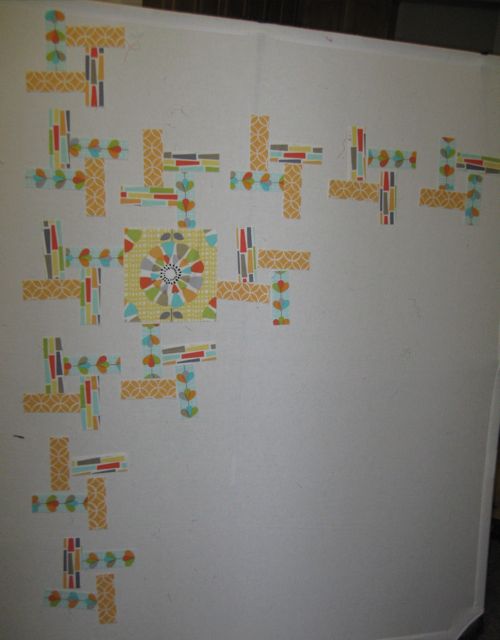 So now to get out my Tri-Recs ruler and make the split rectangles out of dark and light teal, the dark closest to the patterned fabric. After I get the blocks sewn up, I’ll decide whether the background will be the lighter teal or a mixture, whether it will be all negative space or whether I’ll make a pattern block or two out of four shades of teal and place them here and there.

Linking up to NewFO

Linking up to Design Wall Monday at Patchwork Times and WIP Wednesday at Freshly Pieced; and I just found Esther’s WOW:WIP.