After practicing on 12-inch blocks, I felt ready to expand to 40 x 60 tops. Easier said than done on a domestic sewing machine. That stitch length that I’d begun to get under control is again all over the place. Those curves that are easy to do in one smooth motion when working small need stops and starts and are no longer smooth.  Even though I stopped and put the needle down (by hand; mine is not a new sewing machine) and tried to keep the same angle, I ended up with more zigs and zags than intended. I did learn a couple of things, though. 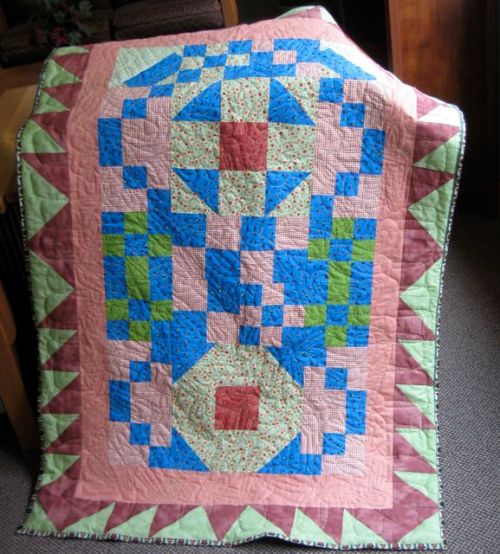 Paperclips had been recognizable as such when done smaller; not so much larger. This overlapping design tended to get the quilting closer than I wanted it. Whether that is the nature of all overlapping designs or just my lack of control, time will tell. I learned it was harder to plan space coverage with a design that starts large and echoes internally. The opposite of what I would have expected. This top, which has been patiently waiting since August (here), is finally a  finished quilt.

I worked a little more successfully on this top that  has been finished (here), since February. For quilting it I chose a pattern Leah Day calls Hobbit Holes

It was easier to enlarge to fit because it is sewn from inside out.  I could start a motif and evaluate how much larger it needed to be to fit. After each “loop” I could pause and evaluate again. It also kept a nicer distance between rows of stitching. It shows better on the back (and I love the backing print–it is a print, not a batik). 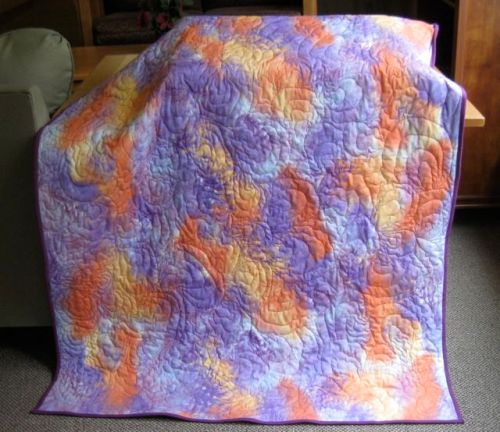 I found the tension changing with speed changes. Interesting. I’ll have to learn to control that. Also it seemed on some fabrics–the Kona solids–I got a nicer stitch than on others.

So far I have not been worrying about that equidistant space between lines. I think that will come with more practice.  I did consciously focus on travel stitching and echoing. Thank goodness kids are not fussy.

The destination has changed. These two quilts will go to a foster care mom who likes to give each fostered child a quilt.

It’s a finish, so I’ll be linking up with TGIFF and Link a Finish Friday. Don’t get to do that  often. And with Leah Day’s FMQ linkup.