Double Z is the block Erin gave us for the Classic Meets Modern Block of the Month. It took a while to adapt it.  I could shift the halves for an asymmetrical look, but though that has been my favorite modern feature, it isn’t the only one, and I was ready for a change.

My first thought was to make the triangles irregular. (I refuse to use the word “womky.”) But as you can see from the instructions, this pattern needs the tips to meet to get the Z effect.  I considered making the 16 half-square-triangles and looking at them to see if it just might work, and if not using them elsewhere.

Meanwhile, a new idea was forming–this one had two sources. I was reading Vintage Quilt Revival Yes, they have a quilt made on this pattern, but I needed my own modification. I was intrigued by their “Dancing Squares” quilt and discussion where the modernization is to add negative space by alternating blocks made traditionally with blocks following the same pattern but substituting background color for pattern in a couple strategic places. As I was looking at the block, pondering what would be an effective place to substitute background for print, I remembered another BOM, the Vice Versa BOM. I had been intrigued as people posted their pairs of blocks with color reversals.

[ETA link to a sample of one of those blog entries ]

So my negative space became the figure as I eliminated print in one of the “Zs” and made the background from a second print, the second print reflecting Erin’s two-print sample. My block does not follow either idea exactly, but you can see how it is related to both. I really enjoy tracing an idea backwards to its source(s) when possible.

For the second try, I experimented with using only two fabrics. 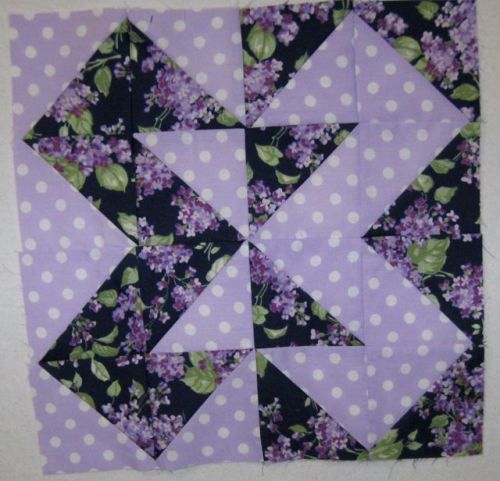 I haven’t decided which I like better or if one is more modern than the other.

You will find the book, Vintage Quilt Revival: 22 Modern Designs From Classic Blocks interesting if you like patterns, if you want to see samples of modernization(and ponder a set of features), and if you want a small taste of quilt history.

Not only am I linking with Classic Meets Modern, but also since it isn’t midnight yet, with Needle and Thread Thursday–button in the sidebar.

ETA: So long as I keep up with BOMs, I’ll have at least one NewFO to share at the end of the month. I am not making the BOMs as parts of a sampler–each is the beginning of a quilt. Not the usual approach, but it works for me.

Tagged as Block of the Month, needle and thread thursday, New FO, patchwork