Little Logan’s first Christmas and first visit to Portland are over. A lot can happen in a week. He made progress toward walking but still holds on to travel. Early in the visit he still mostly crawled to move and pulled up to practice or to play.

Note the fashion statement for the Pacific Northwest–couldn’t appear without a plaid flannel shirt!

At first it took two hands for standing, and one thing at a time was the MO. Gradually he got braver. 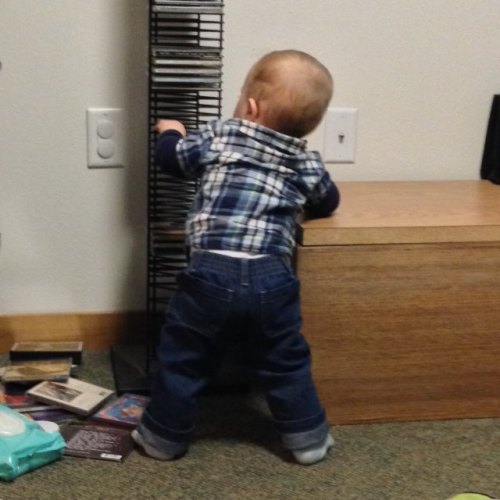 He kept busy for a day or so “organizing” my CD collection. Below he is leaning pretty heavily on the one elbow, though he is using the other hand to move things.

By the end of the week he crawled only if there was no furniture to hold onto and moved quite a bit faster with the holding-on walking. Sometimes he was barely holding on, but was not quite ready to let go. It won’t be long. 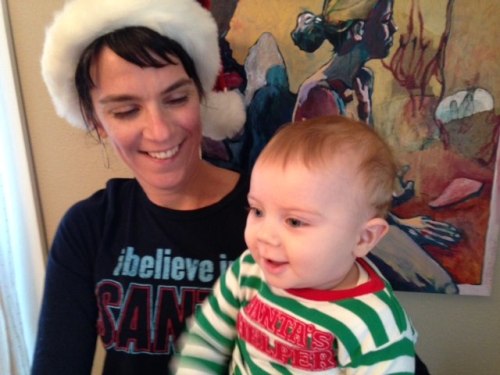 His Christmas pajamas said, “Santa’s Little Helper.” His aunt was not to be outdone with her “I believe in Santa” shirt.

Opening presents was fun, as was playing with the wrapping paper. 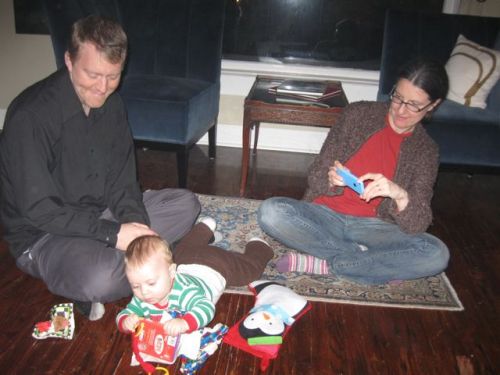 We tried a few outings.

Undaunted, he chewed away at the cereal Os while we sipped lattes and ate sweets.

To Lan Su Chinese Garden where he enjoyed it his way.

And was Mr. Sociable at the tearoom. 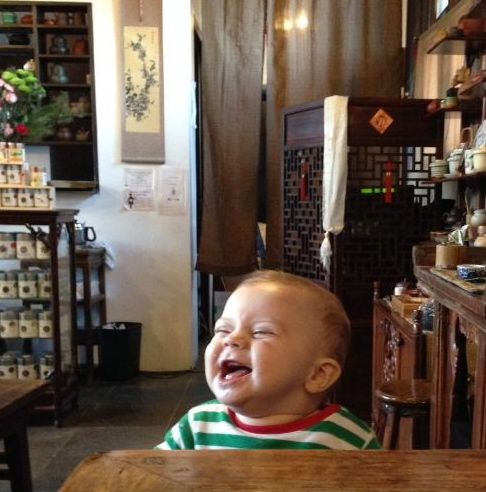 I am sure that if we understood baby talk, we too would have gotten the joke. He charmed the waitress and worked till the people at nearby tables acknowledged him.

And on the last evening he joined us for dinner at Mee Sen Thai restaurant.

When wearing a black turtleneck shirt, one must be more serious.

In a couple weeks he will be a year old; soon he will have to do something spectacular to get the attention he can get these days just by being himself.