Challenges come in various shapes and sizes.  Some start with fabric combinations. One such is the Modern Quilt Guild’s Riley Blake challenge; it starts with six fat quarters of Riley Blake Basics.

My first thought was that the fabrics needed space between them (though I’ve since seen some great examples where they were used adjacently). My second thought was that the aqua chevron pieces needed to be large to showcase the print (though I’ve seen some cut small that look great). The rules are pretty open: add any solid; add any Riley Blake print; may omit any of the six fabrics; object must be quilted.

I decided on an  infant-size quilt (for the baby with modern taste) and got out the graph paper. I started with a large square for the aqua and added squares around it. Might be the first time I’ve liked a first draft of a design–oh I did enlarge the aqua square to make the other measurements come out better. I finished the top at a recent guild retreat. 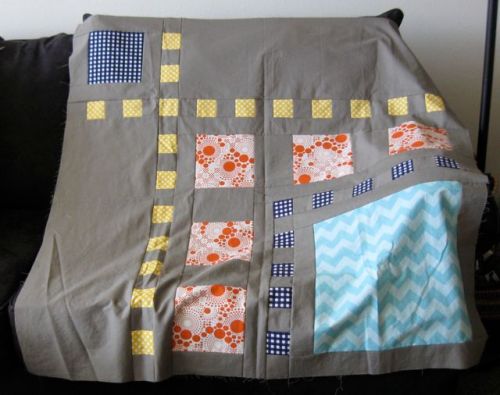 I had cut the pieces at home before the retreat, so sewing it went fairly quickly; I was finished in a couple of hours. Now to think on quilting options.

It went together so quickly that I feared running out of projects at the 3-day retreat. So that night instead of counting sheep, I planned a pair of pillows with the left over fabric.

I have been playing with slash-and-insert lately, and this fabric seemed fitting for such a project. Interestingly, these pillows took as long to assemble as the above quilt top. Even though it has happened before, I remain amazed at how much time improv takes. It takes longer than the more regular squares and rectangles that I can chain piece. Every slash is a new design decision. Every slash is as much a possibility of ruining what is there as enhancing it. I came very close to abandoning the two pillow idea and making just one because I liked the top at that point. But I went ahead with my plan and don’t dislike the pair. Also incubating quilting ideas.

Then there are challenges where chance makes some decisions. Such a challenge was offered by my other guild.  We drew a number which became a page number. We closed our eyes and drew a magazine (not a quilting magazine) from a big pile. The challenge is to use our page (the number drawn) as inspiration for a quilt: colors, designs, or words.  My magazine was a journal for horse breeders and racers. I have until spring, and the quilt is small.  I will have an idea by then.