The warm, sunny day invited me to investigate the spring flowers at Lan Su Chinese Garden in Portland. Some, like the plum blossoms, were already past, but many were in full bloom.  Magnolias were blooming along the sidewalk outside the garden while the lions guarded the entrance.

Appropriately enough, the garden is located in Chinatown. 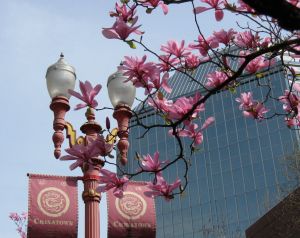 There are street lights like this throughout the downtown area, but in Chinatown, they are painted red. 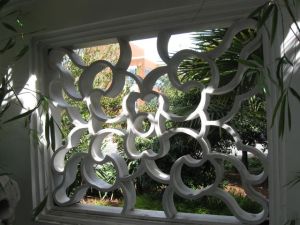 Although a real philosopher’s garden would not have windows to the outside–the whole point being seclusion for contemplation–here in the city there are codes and requirements for windows.

So decorative windows were constructed. Thus people outside can look in and see some of the garden without paying to enter. And for the viewers inside, there are plants along the outside, so the view outside from inside is still mostly garden.

What a greeting, the flowering vine over this gate!

There were quite a few people there enjoying the garden along with me.  Families were making use of teaching guides.  One of them is a page of photos and the children are to find the corresponding item in the garden.  I heard several excited voices announcing having  located one. And there is the dragon scavenger hunt. I heard a boy telling his parents how many he had seen so far. 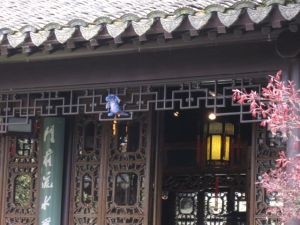 In February I showed the dragon inside the landboat and the one outside the tea house. This one is over the entrance to the study. I have probably seen all nine, but I am usually thinking more about photographing flowers.

Because of the spectacular flowers this month, more of my photographs are larger views.  Close ups were for when they were few and far between.

The landboat and bridge will be my places for repeat photographs since there are views not obstructed by trees, unlike views that are possible in winter, but less so as the trees are leafing out. 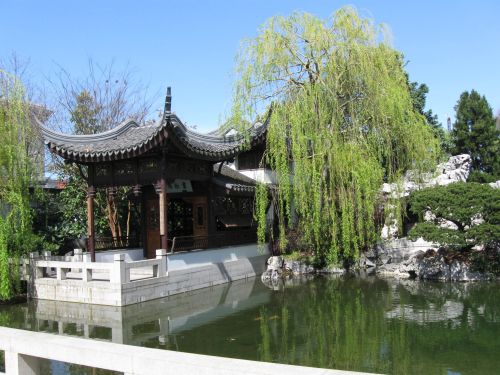 Isn’t the willow by the landboat a lot greener than it was six weeks ago? Here is a view of the “deck” of the landboat. The carving on all the buildings is lovely.

Next, the bridge from each side.

Note the Lake Tai rock to the left. 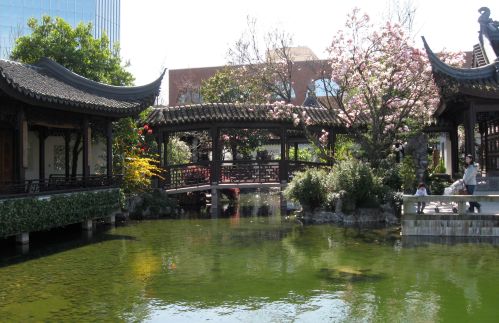 Bridge from the other side

Here is a tree that looks like it is flowering, but actually it has pink leaves.

The building in the foreground is the Pavilion.[4/25/12 Actually it is the Moon Locking Pavilion–April update will show Knowing the Fish.] There is a story the guides tell that goes with it. One philosopher says something about fish being happy and the second asks how he, not being a fish, knows they are happy. He replies, “How do you, not being me, know that I don’t know the fish are happy?”  The building in the background is the tea house, and of course I stopped for some.

Remember the tree that had one red bloom in February? Here it is now. 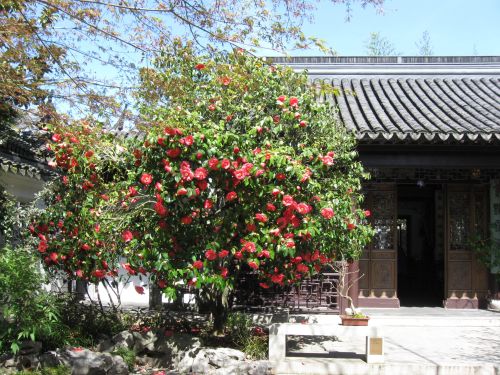 In February when there were no leaves or blooms, what interested me was how this tree’s limb had been propped.  It reminded me of trees in Japan, wide sprawling trees with from 3-7 props.

This time, of course, there were flowers.

Notice also the moss! It rained a lot in March. Next year I will have to get to the garden in March in hopes of seeing the plum blossom tree full of flowers. And I still have to go on a guided walk and be told more about the plants.

Do you have any place you like to go to watch the seasons change?

Filed under nature, Portland OR